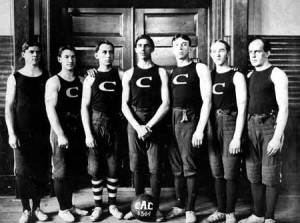 It's like looking into a mirror into our own time.

The grand tradition of UConn basketball began quietly in 1901. I'm a sucker for early-20th-century-kitsch. And with 17 days until the new season begins, today we honor the undefeated 1900-1901 team, who scored exactly 17 points in their first and only game. Against a local high school.

Which is why I went with that whole "humble" preamble.

Not much is known about that first basketball game, a 17-12 victory over nearby Windham High School in 1901. Nobody even knows what day it happened.

If I knew how to look at microfilm during my time at UConn, maybe the Daily Campus archives might have shed some light on the game. But with only 29 total points, I'm guessing that any accounts of the game must have included the phrase "they kept a lid on that basket" as a complaint about court maintenance rather than poor shooting.

Rhody, the bane of UConn's sporting existence until we moved on to bigger things, beat CAC 59-6 in late 1907, but the Aggies avenged it with a historic 24-21 win later that season.

UConn continued to play local high schools and sports clubs until 1916, although the tradition of playing hopelessly overmatched opponents continues to this day: holler if you hear me, Harvard, Colgate and Syracuse.