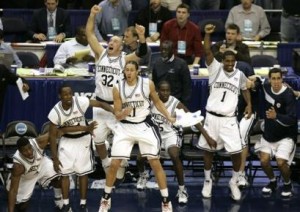 Here we are, number 19. The first thing "19" that may jump to mind for some UConn fans is the 19-0 record that the 1999 team had to start the season. However, that team is going to get a lot more press later in the countdown so instead we're focusing our attention on the 19 NCAA tournament game the Huskies won this decade.

There may be 19 wins, but some games stand out from the rest, either for good or ill, so I will just review the three best and three worst games of UConn's tournament runs this decade.

A solid UConn team was upset by a decent NC State team led by the hilariously insane Julius Hodge. This makes the list because coming into this tournament the '05 squad seemed to be putting it all together. They had a great run to close out the season and a game in the close confines of Worcester seemed like a gimmie. It wasn't.

Yes, this was a UConn win, but it was an ugly one and a 1 seed came unforgiveably close to losing to a 16. You may ask "why bother to put in a win ahead of any of the losses?" It is because this win was so disappointing and such a accurate indicator of what was to come. Sure there are other disappointing losses (to Texas in San Antonio in 2003 jumps to mind), but there was just something about the group of players on this team that made the tournament a nightmare.

No surprise here. This squad was a juggernaut on paper but outside of one game (which we'll get to in a minute) they were never able to put it together. The less said about this game the better.

Sure UConn was a big favorite once Missouri knocked off Memphis in the Sweet 16, and yes, UConn did not win a national championship, but hey, UConn made its third Final Four, you cannot top that.

I think the photo at the top of the post sums up this game nicely. If time stopped right after this game it would be thought of as one of the best UConn games of all time, but time didn't stop. UConn had to play 48 hours later and I'm afraid the bad taste from that experience makes people forget just how great this win was.

If it was not for a title, the Georgia Tech game would have no place on this list. UConn cruised to a win and it was never close. On the other hand, the Duke game would have been a classic if it had been played on the courts outside of North. Because of Emeka Okafor's foul trouble, Duke badly outplayed UConn for the last 15 minutes of the first half and for the first 15 of the second half. Thank god for the other 10.