Share All sharing options for: West Virginia 28, UConn 24: This one hurts 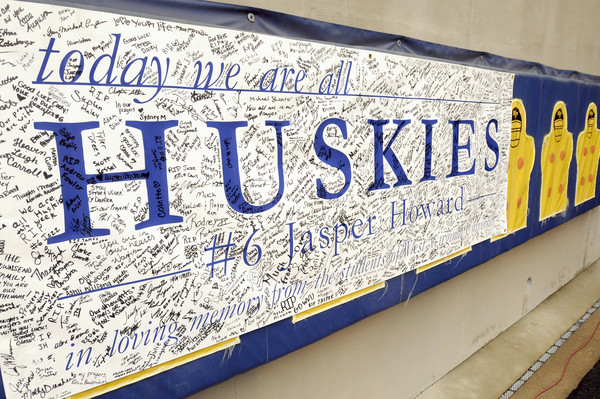 A banner signed by WVU students -- one of the many tributes from the classy 'Eers program -- was placed near UConn's tunnel. (Photo: Courant)

We deserved to win this game.

After everything that happened this week -- not only just the death of a teammate, but also the media circus that engulfed Storrs, the events, the tributes and the emotional outpouring that followed -- the Huskies deserved to finally beat West Virginia.

But despite looking like the better team throughout the better part of three quarters and getting the breaks it needed late, UConn allowed Noel Devine to run wild, continually shot itself in the foot and ultimately let what could have been one of the biggest wins in school history slip away.

The fan in me wants to get on my soapbox as I do pretty much every Saturday and complain about four turnovers or Dave Teggart blowing two of three field goal attempts. But I can't sit here and berate a team that just had a teammate and friend taken away from them because of some stupid, senseless act of violence just because they didn't win. I just can't.

As Randy Edsall said in his postgame comments to ESPNU, right now "we just feel empty."