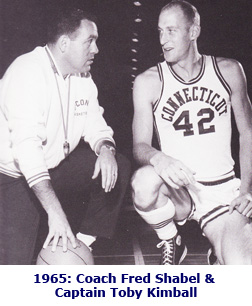 For the 20th spot on our countdown we are once again reaching into UConn's past, this time to grab star center Toby Kimball who, in a 1965 matchup with St. Joe's pulled down 20 rebounds - in the first half.

UConn's 1964-65 team featured both Kimball and Wes Bialosuknia, went 23-2 and was ranked 15th at the end of the year. So naturally the NCAA rewarded them by giving them a first round tournament game against St. Joe's inn the Palestra. As an added bonus, that St. Joe's team was 26-1 and ranked third in the country.

UConn was bolstered by Kimball's incredible 20 rebounds in the first half, but the Huskies could not pull out the win and fell to St. Joe's by six. Kimball ended with an impressive 29 rebounds, though that did not match his career high of 34 that he put up a few weeks earlier against New Hampshire. (For those that are wondering, the single game record is held by Art Quimby who pulled down a mind-boggling 40 rebounds against BU in 1955.)

And, as always, when the blog turns its eye toward Husky history, we need to give a big hat tip to Wayne Norman and my father, Robert Porter, who wrote the invaluable Hoop Tales: UConn Huskies Men's Basketball.