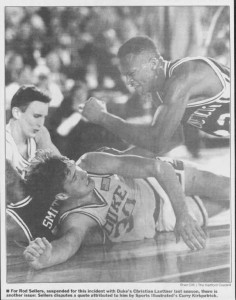 Number 22 on our countdown is a twin bill featuring Huskies that both sported the number, Rod Sellers and Rudy Gay.

Sellers is probably best-known for living out the fantasy of many basketball fans and using Christian Laettner's head for a bit of dribbling practice in the 1991 NCAA tournament. There is also the matter of a lovely little quote about Laettner (which Sellers says is not accurate): that ran in Sports Illustrated:

That may be a bit extreme, but considering the grief Laettner caused Sellers' Huskies, I'll give him a free pass.

Our other 22, Rudy Gay, spent his two years in Storrs as an athletic freak who drove fans batty with his tentative play and inconsistency. Freakishly gifted, he had a nasty habit of disappearing in key moments, though he did take the '06 squad to the Elite 8 (whatever happened to that team anyway? I can't seem to remember anything after Denham Brown hit a buzzer-beater layup.)

However frustrating it was to watch him play, when he showed up for a game he could blow the crowd away. Video clips simply do not do justice to the way he could fly through the air. The windmill dunk he unleashes at the :28 second mark of this video easily stands as the best dunk I have ever seen.

Gay has one thing in common with Sellers beyond the number 22. Much like his forebearer, Gay also picked a notable fight in an NCAA tournament game. In UConn's 2006 Sweet Sixteen matchup with Washington he exchanged some heated words with the Brandon Roy, leading to Roy picking up a technical foul, which put him in foul trouble and allowed UConn to mount a comeback.