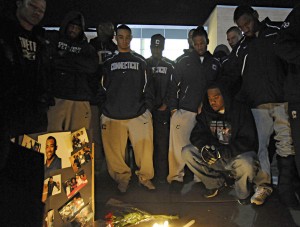 A few important updates in the Jasper Howard murder came out tonight. First, from the AP, a lawyer, Deron Freeman told reporters that police plan to arrest unidentified Bloomfield man who is his client. Freeman, as quoted by the AP:

Freeman's brother, Justin Freeman, is the attorney for Johnny Hood, the 21-year-old man charged today in connection with the incident.

The Courant had the same story but added this incredibly disheartening detail:

Meanwhile, state police sources said Monday that they were perplexed that University of Connecticut police did not call for assistance when more than a half dozen state troopers were monitoring off-campus partying a mile away from where Howard died and that they were not notified of the stabbing until nearly two hours later.

State police sources said troopers and a barracks commander were working at the nearby Carriage House apartments and went off duty at 2 a.m., about 20 minutes before UConn police contacted state police, sources said.

The troopers could have been on the scene within minutes and also could have easily set up road blocks to check cars leaving the university, they said.

Obviously this story is still developing and will be for a while, we'll try to post the biggest updates here, but you can head to just about any sports or Connecticut focused website of your choice and find more heartbreaking details of Howard's story.