A note, plus more links

Share All sharing options for: A note, plus more links 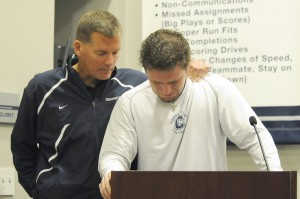 A wrap-up of the early Monday links on the Jasper Howard tragedy is below, but first a short personal note:

I don't presume to speak for the other writers on the blog, but when tragedy hits me closely - and a UConn student being killed in the center of the campus I called home for four years fits that description - I can only respond with a sad nod to what we've lost and then try to lighten the mood. That's all I know.

Jasper Howard's murder is a shocking reminder that we're only as safe as the people who surround us. If this can happen on a rural campus, it can happen anywhere, and we would do well to remember that not everybody appreciates the value of human life at all times. Unfortunately, it often takes a tragedy to realize that UConn students and alumni are a family with a shared heritage, and we all grieve together.

With that said, I think it only right that we - meaning this blog - try to move on as best we can. I understand many will not want to read about football and basketball and soccer this week, and that's OK.

But there's nothing more we can do for Jasper Howard. We can only spread the word on any memorials in his honor, and we can only offer our support to the Howard family and the UConn community, of which we alumni are included.

The three of us, it should be noted, are clowns. We make attempted funny jokes and talk about sports. I hope you'll understand we mean no disrespect to the family and friends by making jokes about ultimately-meaningless sporting events played by 19-to-22-year-old kids. It's just our nature. Please know that it will absolutely feel strange to go back to making sarcastic jokes about Jonathan Mandeldove, and especially strange to go back to talking about football, which we will inevitably do.

For the moment, our thoughts are still on Jasper. Here's a list of up-to-date (as of 2:00 Monday) stories: