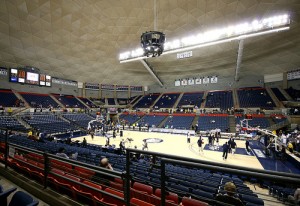 The 27th spot on our countdown is in honor of January 27, 1990, the date of the first basketball game played at the Harry A. Gampel Pavilion. That game featured a 20th ranked UConn team hosting #15 St. John's and winning handily 72-58.

UConn has always been dominant in Gampel, and though the timing for it was right (it opened right in the middle of the dream season), no one could have predicted that UConn basketball would explode the way it did, which means Gampel is on the small size. Originally it only sat 8,241, though an expansion in the summer of 1996 put seats over the corner entrances and expanded the capacity to a not-quite-roomy 10,027.

Fun-slightly-misleading-because-of-scheduling-quirks-fact: The all-time opponent win leader at Gampel? St. John's who has a whopping 3 victories there in the 20 years it has been open.