Share All sharing options for: Your one-stop First Night shop 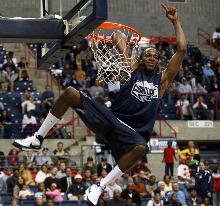 Basketball teams could have begun practice at midnight Thursday night, unless you're John Calipari, in which case you've probably been practicing against the World Wide Wes All-Stars all summer long.

For those of you in the Storrs area, Gampel Pavilion will be holding the traditional "First Night" activities tonight. Admission is free and the doors open at 6:00.

ESPNU (and all-around awesome guy Doug Gottlieb) will be in attendance to cover the proceedings. ESPNU's press release also states that, if you're watching on TV, they'll have some sort of "Campus Connection" segment with UConn students. Now why the hell didn't they do that once when I was a major member* of the UConn student media? ESPN would've hired me on the spot for my dashing looks and inescapable charm.

But enough of my Craigslist personal ad.

It looks as if the highlight of Friday night will be either 1) seeing the brand-new Gampel scoreboard or 2) seeing who falls over during the dunk contest.

The list of activities appears to be confined to the following:

Noticeably absent is any kind of scrimmage, which sort of defeats the purpose of this being the first chance to see the teams play ball this season. Still, I suppose it will be nice to see all the familiar faces (and new talent) in action. On the other hand, prizes will be awarded to those in attendance. Prizes! Yay, slightly lamer First Night!