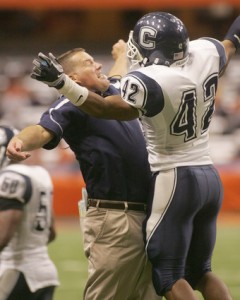 Fight on, you magnificent SOB.

Before we get into TheRoundUp, a reminder that if you're not following TheUConnBlog on Twitter, you're missing some fine Louisville bashing, which takes me upwards of 15 seconds of thoughtsmanship to come up with. Also, a fond welcome back to Sox & Dawgs, who returned after a short absence, just in time for the Red Sox to be swept out of the playoffs.

In Connecticut, though, mid-October heralds the start of basketball season. Coverage of the UConn football team - unless it's in the middle of a weird, 2007-like rise to relevance - immediately takes a back seat to basketball coverage. This would have been a key plot point if Stravinsky had made a 'Rite of Fall.'

Still, though, we don't want to give our beloved football squadron the short shrift. So we'll start off the collection of pressing, important UConn-centric links known as TheRoundUp talking about the big football story of the week:

(There be a rant coming, below the jump.)

If you were to choose a metaphor to describe UConn football compared to the basketball program, what would it be?

"Little brothers," perhaps? UConn football's been relevant for roughly five years, and even then its highest success is roughly equal to a second-round appearance in the NCAA Tournament. "Little brothers" probably works best.

Des Conner, the football beat guy for the Courant, goes with something slightly more quzzical. And his resulting column has caused something of a buzz.

Wikipedia defines "the elephant in the room" as "an English idiom for an obvious truth that is being ignored or goes unaddressed."

I don't think it's any secret that the crazy success of the basketball programs draws more eyeballs than the relative lack of accomplishments on the football field. I still find it weird to see a UConn football game televised on ESPN, whereas Kemba Walker and Maya Moore will be showing up on national TV 5-10 times this season alone.

The underlying point Conner is trying to make is that UConn fans, spoiled by basketball success, demand conference championships immediately or else their attention will be turned to the traditional teams who can provide such feats.

Eight years into its I-A adventure, UConn football is in a nice little nitsch right now - that 6-6/7-5/8-4 sweet spot that serves three purposes: it will keep the bowl games coming consistently, it will keep interest levels high (because the team will have opportunities to make a run at conference titles, e.g. 2007) and it provides a solid foundation for the future.

That's not to say UConn fans should be thrilled to finish 7-5 every year. It's just that, under the Randy Edsall program, progress is going to come slowly.

We overemphasize the most recent information when we analyze sports. (Or in this case, fan support.) UConn isn't selling out Rentschler Field with season tickets - oh no! They're blowing 15-point leads to conference opponents - oh no!

Yes, it sucks that UConn fans don't show up before kickoff. It's annoying that the team is not dominating like this was year 3 of an NCAA Football 2010 dynasty.

It also sucked when Donny Marshall missed those free throws, Ray Allen couldn't get it done against Mississippi State and Jim Calhoun was the best coach to never get to a Final Four.

[And all that's before ignoring: 1) in basketball, finishing sixth in the Big East will give you a nonzero chance of winning the national title; 2) a basketball team with less talent has a much better chance to win compared to a football team with less talent; 3) a basketball team only needs a couple star players to compete for national titles. It is damn hard to build a football program from nothing into a consistent 9/10-game winner.]

The real elephant in the room is this: UConn football fans (and the media who cover them, this blog included) are so damn insecure about the program's "status" that every game becomes a litmus test about whether Randy Edsall can bring this team to the promised land. It doesn't work like that.

Randy Edsall is a good in-game coach who runs a clean-cut program that graduates most of its players. He will win more games than he loses most years. He has shown an aversion to recruiting playmakers at quarterback and receiver, among other blind spots. But given the first sentence I'm willing to make the trade-off of the last sentence.

In my view, UConn is slowly building to an inevitable, legitimate run at the Big East. Whether it comes next year or in two years or in four years, Edsall can get this program there (although seriously: he really needs to step up the recruiting).

When it comes, all the other meta BS will fall into place. If UConn and West Virginia had played the 2007 BE 'championship' game in East Hartford, the atmosphere would have been absolutely electric. When UConn clinches a Big East title at the Rent, the state will go crazy as it did for the Dream Season. Somebody (maybe already in uniform) will be this program's Tate George. And, like the basketball team in 1990, there will be no turning back.

That's my opinion on Edsall, and you're free to disagree. But, for the love of God, spare me the hysterics that UConn football isn't the preferred drug of choice among Connecticutians age 8-80.

This is a fifth-year BCS football program with no tradition or accomplishments (in the grand scheme of things), playing in a state that hasn't had big-time football since the Ivy League was relevant. (And a state which, by the way, failed to sell out the building for a Final Four team 9 out of 15 times last season.)

For better or worse, the off-campus stadium means the team belongs to the entire state plus students/alumni. So keep supporting the program, go to the games (maybe even getting there before kickoff!), talk about the team (maybe even here!). This is all you can do as a fan until the team takes that big step forward.

And if you're one of the bandwagoners Conner is referring to, that's fine. We'll see you in a few years.

Lutrus probably out. That's bad. Endres (he of zero INTs, 65% completions and 3 TD) in as the starter for the foreseeable future. That's good.

Endres doesn't turn the ball over and we now have proof that he can actually hit receivers in stride. Give him the keys, I say.

Dave Borges has some interesting tidbits from Wednesday's Husky Run, which you should check out. Notably: the team realizes it must now play "real defense" now that Thabeet is gone.

The Courant brings the hope on the freshmen, one of whom is supposedly already the best 3-point shooter on the team. Just like Scottie Haralson.

Included mostly for the all-time vague quote championship contender from Coach Cal. See if you can spot it.

From earlier this week, Mike Anthony gives a good rundown of the main preseason storylines for this year's team.

Thursday was Media Day, so the beat guys are going to be pumping out plenty of stuff this week. Just a little taste:

Among the notes from the assorted media members:

--Freshman Kelly Faris is apparently an All-Big East player, according to Geno Auriemma, which is good, since all the rebuilding Huskies have this year is the two best players in America.

Old, but worth celebrating because 2009 WNBA MVP (and Finals MVP) Diana Taurasi is baller.