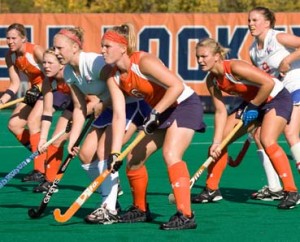 OK, let's pretend we're all caught up on UConn athletics after the last update (maybe I'll even get around to just-barely-underway ice hockey one of these days).

Two-and-a-half out of the four fall Olympic sports are cruisin' right now, and heading for postseason success. None more so than men's soccer, who picked up el gano superfantastico over No. 8 Harvard Wednesday night.

Anyway, it's time to wrap up the last week in under-the-radar UConn athletics. Below the jump, the first actual Stadium Road update, read all about:

All that and more, below the jump.

Saturday's UConn-Syracuse field hockey clash will be the marquee matchup on campus this weekend. The Huskies are looking for revenge after choking away the Big East tournament title at home last season.

These seem to be unquestionably the two best teams in the league; both are destined for the NCAA Tournament, and probably a second meeting in Providence (site of the BE Tournament) next month.

As it is for all UConn coaches, beating Syracuse is job #1. I don't want to say this is the most important field hockey game ever, but if it encourages you to go to the Sherman Complex tomorrow afternoon and yell horrible things at athletes, maybe I will.

I have to say, Wednesday's 4-0 throttling of previously-unbeaten Harvard was unexpected. Not that UConn won - they're 3-1-1 against ranked teams this year. Not that they shut out the Crimson - GK Josh Ford now holds a 560-minute shutout streak heading into this weekend's matches.

But four goals? From a team that only managed 13 in its previous 12 games? Hats off to the suddenly potent striker combination of Carlos Alvarez and Mike Ponce, who each had a pair of goals.

Following UConn's third 0-0 draw of the season, this time with West Virginia in a game postponed from Friday, Wednesday's effort was much needed. A win like that has to be a huge boost of confidence for the Huskies, who need to get maximum points from their fixtures with the Blue Division's bottom two teams in the upcoming week.

With four conference games to play, UConn has the inside track at the division title; it helps that West Virginia, Georgetown and Notre Dame will play each other round-robin in the next 10 days. Two UConn wins this week and they'll be sitting awfully pretty.

Two tough road losses leave UConn scrambling and in some sort of danger of missing the Big East tournament. Jessica Dulski had a rough week in goal, allowing two goals in two minutes at Marquette, and then being unable to stop USF's game-winner 10 minutes from time.

Astonishingly, the Big East is so bunched together, UConn could find itself outside of the top five of the American Division with a (probable) loss to the Irish and a loss/tie with DePaul.

The Huskies still control their postseason destiny, though, with home games against 6th-place Pitt and 2nd-place WVU to close out the regular season.

Things are still positive for the volleyball team, which split a pair of Big East games last weekend. A win in the big match with 'Nova tomorrow will leave them in a good way midway through the conference season.

All well and good, but losing to Syracuse? No. You're dead to me, volleyball.

Except for this final note: the Fairfield game was postponed due to, according to UConnHuskies.com, "unforeseen circumstances." My first guess: ghosts.