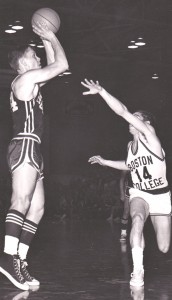 Here we go, 28 days (four weeks!) left until UConn starts playing a sport that won't break my heart until the end of the season.

Since my youth was steeped in Husky history I can't think of a better choice for 28 than the 28.0 points per game that the Poughkeepsie Popper Wes Bialosuknia put up in his senior season, 1966-67.

Being the young pup I am, my best source of information on Bialosuknia is our occasional contributor and my father, Robert Porter, who insists that even the eye-popping 28 ppg massively understates Bialosuknia's shooting ability. The Popper's 28 ppg average came in the pre-3 point era and since many of his shots were from deep, my father estimates that he could have put up 35 ppg in a different era.

Also of note is the fact that Calhoun's style of coaching means that no one has come close to Bialosuknia's record and it will be around for awhile to come. By way of a comparison, check out these stats:

So yeah, he could shoot.