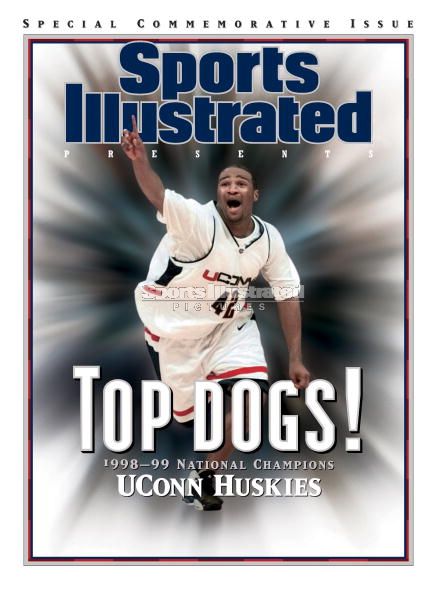 So many photos and happy moments to choose from for this one. But, really, how can you top an elated Khalid -- in the only slimming photo he's ever taken -- his jaw open to Bugs Bunny-like proportions, with the X-Files background?

Twenty-nine, of course, stands for March 29: The day UConn defeated Duke 77-74 to win its first national championship. Or, as I like to call it, The Day Basketball Began.

The year was 1999. People were stocking their bomb shelters in fear of the Y2K bug; Eminem and Limp Bizkit were pounding out the hits on TRL; Rick Majerus was setting the bar for Mark Mangino and later, Baby Mangino -- "To say that Connecticut's rabid fans were hungry for a victory is like saying Rick Majerus has a bit of an appetite," wrote SI's Jack McCallum in his Finals writeup (read this now) -- Coach Cal still had his luxurious locks, and, as Wikipedia points out, Goku of Dragon Ball Z transformed into a Super Saiyan for the first time.

The Huskies, with three Elite Eight berths -- and losses -- already under their belts that decade, had risen to the top spot in the polls for a good portion of the season, thanks to the awesome force that was/is Richard Hamilton, the leadership and late-night snacking of Khalid El-Amin and a host of role players, including Ricky Moore, perennial NBA 12th man Jake Voskhul and Kevin Freeman, that really made this team so damn good and appealing; had this blog been around, it would have exploded due to an overload of bad jokes based on the variety of personalities.

But despite earning a No. 1 seed in the West region, Cal's ragtag bunch came into their final matchup nine 1/2-point underdogs. Which in retrospect kind of makes sense. Duke's roster was stacked with a mix of future pros and college all-stars that would flame out in the pros (the Duke way), and the Devils were, as McCallum wrote, on the verge of becoming the team of the decade with two titles and five Final Four appearances already over 10 seasons.

However, by doubling and collapsing on Elton Brand in the post and zoning the other four Duke shooters, and stressing the importance of running -- perhaps the epiphany that sparked a never-ending string of preseason quotes -- the Huskies neutralized the Devils' attack. Offensively, UConn used its speed advantage to blow by 'em, and RIP, the apple of all of Connecticut's collective eye, scored 27 en route to earning tourney MOP.

And it didn't to hurt to have a nicely-timed choked from Trajan Langdon.

With 15 seconds left and the Huskies leading 75-74, Duke went to senior Trajan Langdon to win the game. "I heard Coach K yelling to Trajan, 'Go get the ball and take him,'" said Moore. "I loved that. Him against me. All I had to do was get one stop. I started smiling because I knew he wasn't going to score that basket." Langdon juked and jived and tried to find a driving lane to the basket. But Moore, perhaps the nation's best man-on-man defender -- the one, according to Calhoun, who "cuts the head off the dragon" -- blocked his path and forced Langdon into a travel, an ignominious end to the Alaskan Assassin's college career.

That might be my favorite paragraph in journalism history.

El-Amin would go on to ice two free throws with 5.2 seconds left, Langdon was stripped as time expired and the Huskies indeed shocked the world.

As the celebration began, a security guard confused El-Amin with a fan and tried to usher him off the court. The whole thing was straightened out, but not before the guard left us with the words that will live in infamy: