Lutrus Watch, Redux: And so it begins (again)

Share All sharing options for: Lutrus Watch, Redux: And so it begins (again) 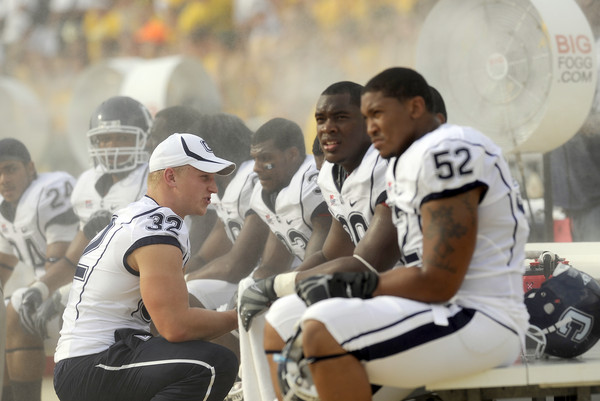 It may be time to break out the swishy pants once again.

It took Scott Lutrus 35 days to return to the field after suffering the mightiest of stringers in the Huskies' season-opening win in Ohio. But it took all of 19 minutes in Saturday's soul-crushing loss to Pitt for Lutrus to head back to the sidelines.

That's only pure speculation on my part, but it was a thought I would think most would have had as soon as they saw Lutrus grasping his almost limp left arm and lurching over on one knee after a tackle of Panthers running back Ray Graham near the goal line with about 11:29 to go in the second quarter.

It was a thought echoed by the people around me during the game, some of which in the know. And one that wasn't exactly alleviated by Edsall after the game:

"I think everybody knew that could happen," Edsall said. "I'll wait to see what the doctors tell me, but I wouldn't think we would see him anytime soon."

The weird -- and perhaps most distressing -- thing is that Lutrus wasn't even in on the tackle of Graham during his final play. I just watched the replay of that play on ESPN360 (47:04, if you're interested), and it clearly shows Lutrus getting sent to the ground by a Henry Hynoski block about a foot or so away from the play. But the way he hit the ground didn't seem to be the trouble -- he didn't get his arm caught under anything or twist it back; in fact, he landed on his right shoulder, not his left. It looked as though it was something else, and the ever-insightful Mike Patrick and Craig James immediately noted that it could be a result of his previous injury.

Lutrus -- who wore a neck guard Saturday, likely to prevent any further damage (if that makes any sense) to the stinger -- ultimately walked off the field without any help and didn't grasp his arm or anything as he trotted off to the sideline; in fact, he walked away as if nothing was wrong and lifted the arm above his head to take his helmet off seconds after stepping off the field. But I'm not sure how much that really means, especially since he never returned to the game, leaving Jory Johnson to fill in with Kijuan Dabney now out for the season.

It's possible that this could again become a game-to-game situation, forcing me to use the swishy pants photo at least a few more times. Then again, based off of Edsall's comments after the game, it appears as though there won't be any Lutrusfication for the rest of the season -- perhaps even longer.