DeJuan Blair should be playing in this game: A UConn-Pitt preview

Share All sharing options for: DeJuan Blair should be playing in this game: A UConn-Pitt preview 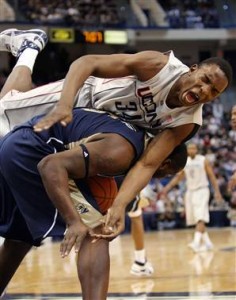 Personal foul: 15 yards and an Elite 8 choke assessed to Pittsburgh.

I promise, this post only talks about basketball for like one paragraph at most. Because yay Football Saturday!

For the first time in three weeks, UConn is playing a competitive football game, and as it turns out, today's a big day.

UConn is of course traveling to Big East contender Pittsburgh for a 3:30 kickoff on ABC. The Huskies come in 3-1 with two sort-of comfortable wins and one agonizing loss, but the Panthers (4-1, 1-0) are almost certainly the best team on UConn's schedule up to this point.

As noted elsewhere, UConn plays four of its seven conference games at home, but draws Pitt, West Virginia and Cincinnati on the road.

To win the conference - if A-Rod can hit a game-tying HR in the 9th inning, a man can dream, no? - UConn is going to have to pick off one or two of those games and lock their ish down at Rentschler Field. (Note: this will not happen. UConn will likely go 3-4 in the league.)

Pitt's offense is a decent matchup for UConn. They run the ball fairly well and have an inconsistent (by reputation, anyway) quarterback. UConn's defense, of course, practices against such an offense five days a week.

The numbers say Bill Stull has been excellent (66.7 percent completion %, 11 TD-1 INT) and he has plenty of weapons to work with.

He's also working with a new offensive coordinator, who appears to be rinsing out the memories of last year's 3-0 loss to Oregon State in the Sun Bowl.

Dion Lewis (580 yards, 7 TD, 5.4 ypc) is doing a serviceable job as a replacement for LeSean McCoy, and whether or not Pitt's offense moves at will probably depends on Lewis' performance against a solid UConn front 7.

Speaking of which, good news for UConn, as the fabled Lutrus Watch comes to a conclusion. Pittsburgh will FEEL THE LUTRUSITY Saturday, which he is truly 100% - will be a huge boost to a unit that is eighth in the country in rushing defense and 19th in pass defense.

The Pitt defense is not elite, just looking at the numbers (110.2 rush ypg, 232 pass ypg), but its defensive line features a dominant pair of ends (Greg Romeus and Jabaal Sheard) and two pretty good tackles, too. I am infatuated with UConn's underrated offensive line, so I am very interested to see the battle in the trenches.

The worst news for UConn is that Pitt's defensive weakness is in the secondary. Cody Endres (inexplicable 23-for-30/289 against Rhode Island aside) has not shown much in the way of above-averageness, and he'll probably have to hit some receivers today to keep pace with the Panthers on the scoreboard.

As always, I remain pessimistic that UConn's offense will join the 1960's and find a nice balance between passing and rushing.

This will be UConn's fourth football game against Pittsburgh in the last 10 months, if you count the two physical clusterf---s on the basketball court last February.

That doesn't quite translate to the football field, since they play in the most sterile home-field environment in the league (except maybe USF) and they have an easily- and often-mocked head coach. 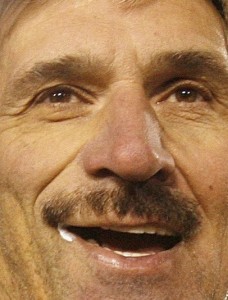 GENERIC WANNSTEDT MOCKEY HERE. Or: You will see this photo in your nightmares.

So it's a little easier for me to admit that Pittsburgh is probably the more complete team here. UConn's going to need a little Formula 2007 (turnovers and special teams) to pull out a victory at Heinz Field.

Today's not even necessarily a must-win (unless you think a Big East title is realistic this year) since Louisville comes in next week to take its whooping at the Rent.

But ah...what the hell. If the Yankees have taught me anything this past 24 hours, it's that the teams I root for will always win. Always.