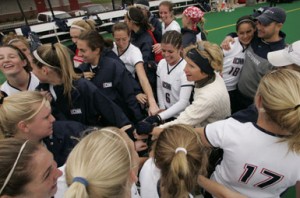 The field hockey team. I got nothing witty here.

UConn-Pitt football preview, or some facsimile thereof, should be posted late Friday night. Until then, there's this bit of housekeeping:

I'll be honest: I know a hell of a lot more about soccer (and UConn soccer) than I do field hockey and volleyball (and its UConn equivalent).

I can spend hours watching millions of people in Not America go nuts over the beautiful game. I have woken up at 8 AM on a Saturday to watch my designated English team with which I have no geographical connection (Up the Villa!). I bring this up mostly to brag about being one of those middle-class, suburban hipster types you might read about in the New Yorker.

But I also bring it up to point out that soccer - at UConn, anyway - looks positively mainstream compared to our final two fall sports teams. Even I can't tell you a whole lot about field hockey and volleyball. Maybe there are unemployed volleyballphiles out there, but I don't know.

That being said, they're part of the UConn family, too. And I will do my best to explain how super awesome they are compared to the filthy Syracuses, Villanovas and Providences of the world.

I'll give you a spoiler for what comes below the jump:

They are both super awesome.

OK, I lied. Only one of these teams is super awesome. That would be...

Every year, the field hockey squad is quietly one of the winningest programs at UConn, and they have been for 30 years.

UConn won the first-ever NCAA field hockey championship in 1981 (beating UMass in the final at hallowed Memorial Stadium/Future Jim Calhoun Training Complex in Storrs), and then won it all again in 1985. They were national runners-up in '82 and '83.

Current head coach - and wouldn't you know it, yet another Hall of Famer in her sport. Aren't we just so awesome? - Nancy Stevens arrived on the scene in 1990 and has kept the Huskies among the national elite in the sport.

UConn has made the NCAA Tournament in 13 of Stevens' 19 years (only 16 teams make the tournament now, and it was 12 in the early '90s) and 12 of the last 13. Included in that period is four trips to the national semifinals.

The Huskies are known for scoring lots and lots of goals against haplessly overmatched Big East teams (UConn has won a combined 21 regular season and tournament titles under Stevens) and coming up short against the super-elite teams.

Think of them like a Pac-10 football team. High-scoring, entertaining to watch (and yes, I have watched multiple field hockey games. It's 250 times better than NASCAR.), but ultimately, they'll lose out to better-defending teams in the end.

Everything was going swimmingly until Nov. 9, when the Huskies met fellow co-champion and 19-1 Syracuse in the Big East title game on UConn's home field.

A day earlier, UConn had beaten Louisville, the third team to tie for the conference crown, 4-1 to advance. The Huskies had dealt the Orange their only loss, 1-0 in Syracuse three weeks earlier. Plus, being Syracuse girls, they were LIBELOUS DESCRIPTION OF SYRACUSE GIRLS GOES HERE. (Sorry, there's only so many original ways to mock the 'Cuse.)

In the championship game, UConn dominated possession and outshot the Orange 19-6, but couldn't put one in the net. It was one of those classic 'F---, we shouldn't have let the underdog hang around' games.

Then, with no time left, Syracuse's Maggie Befort scored the match's only goal, and due to a quirky field hockey timing rule, the Orange won the Big East title, 1-0.

The following week, UConn lost to Duke, 2-1, in the first round of the NCAA Tournament. And that's pretty much the cardinal sin of UConn sports.

An 11-1 start (the only loss at No. 4 Princeton last week) has placed the Huskies at No. 7 in all the land. In conference play, UConn is 3-0 with only an Oct. 17 showdown with No. 6 Syracuse in Storrs standing in the way of another regular-season title.

In each of my four years on campus, Nancy Stevens seemed to come up with some new weapon used to make opposing defenses go all explodey. This year, it's Loran Sherer, a senior transfer who used her first three years of eligibility at Durham University in England (where she also plays for her country's U-21 national team), so you know she's good.

There's not a lot of it here. Volleyball is the one fall team to have tasted little success (if you count fourth-rate bowl games as success; I do.).

The Huskies haven't won a Big East tournament game this decade; if I'm reading the media guide right, they've never made the NCAA Tournament, either. However, that is sorta offset by a pair of Big East regular season titles and a 3-0 record in the Kaiser Permanente Challenge in 1997.

Ups: Winning 11 out of 12 over a five-week period in October and November, which gave UConn faint hopes at winning the Big East title.

Downs: A four-game losing streak to end the season, including crashing out of the Big East tournament in three straight sets.

I think Gampel Pavilion's mojo will fail to work for the volleyball team until they hire a Hall of Fame coach.

UConn played a bunch of non-conference games against West Coast teams. As we all know, since the West Coast is full of kids with nothing better to do than to look pretty and play volleyball.

As such UConn took its lumps, falling below .500 before conference play began. They then ran off three wins in four matches to move within a half-game of first-place in the Big East with 10 league games to go. If the Big East had a mascot purely for volleyball, it would be pleased with UConn's play, I'm sure.

Someone more educated on volleyball statistics may be able to help me out, but it appears as if Rebecca Murray, Chauntay Mickens, Mattison Quayle and Jordan Kirk are putting up solid numbers. I hereby dub them the Kill Krew.

Bonus points to Ms. Mickens for showing my type of humor in the "Get To Know..." section of her media guide bio, on tough arenas to play in:

"I don't think there is anywhere that is a tough place to play, unless the court was covered with broken glass or hot coals."