Elsewhere on Stadium Road I: Soccer

Share All sharing options for: Elsewhere on Stadium Road I: Soccer 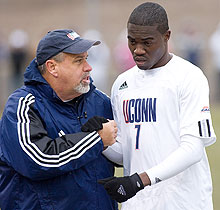 The Sporting News' list of the 399 best sports cities was released earlier this week, and Storrs, Conn. is 43rd on the list. Suck on that, Yakima!

Also, congratulations to 90th-place Syracuse, which maintains its place as the No. 1 sports town in the vestigial tail known as New York State. I know of no better honor to bestow to our Orange friends. (Sidenote: don't Google Image search "vestigial tail". Trust me on this one.)

Anyway, I'm going to pretend that this rating is not solely due to the double Final Four/International Bowl bonanza last season, and that UConn's performance/fan following for its minor sports has something to do with it.

Under that shaky premise, I bring you the first of three belated primers on UConn's six fall/winter sports teams that get next to no coverage. Sure, it's halfway through the seasons for the fall teams, but to that I say: meh.

We start, below the jump, with a look at the men's and women's futbol teams, who are both dominating the Big East in a way that I find satisfactory.

Believe it or not, but the men's soccer team is arguably UConn's second-most successful program, behind the women's basketball team.

The Huskies have won two NCAA championships (1981, 2000) and an NSCAA title in 1948, apparently before the NCAA sponsored a national championship.

Joe Morrone (Hall of Fame coach from 1969-1996, professor at the school ) was kind of like the Coach Cal of soccer - he was the fourth men's soccer coach in NCAA history to win 400 games. And the 4,500-seat stadium on the Storrs campus that bears his name is one of college soccer's finest.

But Morrone grew old, as all great coaches must do, and then-athletic director Lew Perkins kinda-sorta unceremoniously kicked him out of the coaching profession in 1997. Not UConn's finest hour.

Since 1997, the Huskies have been in the capable yet gruff hands of Ray Reid. In his 12-plus years at UConn, Reid has won 183 games and UConn's third national title. His teams - most notably, the 2005 and 2007 editions which won Big East titles and underachieved in the NCAA Tournament - are usually immensly talented but rely on long balls, set pieces and other teams' shoddy defending to score.

Despite that, the Huskies under Reid are nearly always in the national top 20 and NCAA Tournament-bound. Also, they have the Goal Patrol supporters' group, who lead the nation in yelling "You suck!" at opposing goalkeepers.

UConn took an agonizing home defeat to Virginia Tech in the NCAA quarterfinals in '07 and looked to be among the favorites in '08. But things didn't go as planned. UConn battled injuries to their top offensive player (Hermann Trophy winner and Canadian hero/Toronto FC first-round draft pick, O'Brian White) and several other key players and struggled to score all season.

Lowlights included a 3-1 thrashing at rival St. John's and a quarterfinal exit in the Big East tournament. UConn made a nice run in the the third round of the NCAA Tournament before falling in OT to Creighton, but it was one of Reid's more forgettable seasons.

UConn is 6-2-2 and stands just on the outside looking in (the fist team in the "Also Receiving Votes" category) of the NSCAA poll. It appeared as though the Huskies were due for a step back losing half of their starting lineup and most of their scoring power, and you could argue that that's been the case.

Things didn't start out great, as UConn dropped a 3-0 decision at home to Boston University and were held to scoreless draws with No. 6(!) Dartmouth and Iona. (Yeah, you know a sport is screwed up when Dartmouth is in the top 10.)

Since then, Reid's crew has rattled off five wins in the team's first six Big East games to move to the top of the league, as you can see here:

Almost 2/3rds of UConn's goals have come from midfielder Tony Cascio (5) and forward Alan Ponce (3). The latter is a junior college transfer, which means he is required to be a metaphorical hired assassin around the goal.

The defensive troika of Kwame Watson-Siriboe, Greg King and Shawn Nicklaw have helped the UConn defense have held opponents to under four shots on goal per game.

And if other teams get past them, they have to face Josh Ford, now in his 47th 4th year as a starter in goal. He's played every minute of every game, and he's recorded 7 clean sheets in 10 games.

Despite never winning a national title - mostly because North Carolina has a weird, UCLA-basketball-in-the-60's dominance over the sport - UConn made each of the first 26 NCAA Tournaments, advancing to seven Final Fours, four national title games and the Elite Eight eight times in a row (1993-2000).

Len Tsantiris, a 1977 UConn alum, joined the program as coach in 1982 and has remained ever since, content to play the part of Geno to Morrone's Coach Cal. He's won 400-plus games in his time and led UConn to

An Elite Eight loss to Florida State in 2006 seemed to portend good things, especially given UConn's history. But then, Tsantiris found out...

...that history can be thrown out easily, like so many gyros. Last season was a young team which defended OK, but had a severe goalophobia. The Huskies ended the season scoring 20 times in 22 games which, even for soccer, is poor.

The season included a stretch (Sept. 7-Oct. 12) of one win in nine games. In that time, UConn scored 7 goals and allowed 13, indicating that the team wasn't all-around terrible, just offensively inept.

After a 6-8-5 regular-season record meant the Huskies just barely qualified for the Big East Tourney. But once in the postseason, the Huskies won at Georgetown to advance to the semifinals, then survived penalty kicks with National Division champion West Virginia to move on to the final.

There, they put up a fight against eventual national runner-up Notre Dame before falling, 1-0, in overtime. The Huskies finished under .500; it was the first time UConn had ever missed the NCAA Tournament.

UConn has won nine of 10 since opening 0-2, and despite a 1-0 loss at St. John's, they're in the driver's seat for their first Big East division title since 2005. In 12 games, they've already outscored last season's team. Huzzah.

Annie Yi, UConn's leading scorer in each of the last two seasons, missed her senior season after tearing her ACL in August. So you should not watch her, because she'll be sitting down or on crutches.

Beyond that, what's most striking about UConn's roster is the youth. Only four players on the roster (besides Yi) are seniors, and only two of those players start with any regularity.

The Huskies' top three goalscorers - the Flying Finn Linda Ruuto (6 goals), Quebec's Melissa Busque (5) and "Made in the USA" Jessica Schufelt (3) - are all freshmen and sophomores.

Sophomore goalie Jessica Dulski has allowed 9 goals and the relatively-veteran defense led by senior Lauren Ebert has allowed 69 shots on goal in 12 games. However, it's not as bad as it looks: the numbers are skewed by a 30-shot, 10-on target effort by Penn State back in August. Weirdly, that was a game UConn led most of the way before giving up two late goals in a 3-2 defeat.