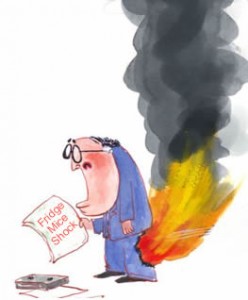 So do I think Edsall's a liar liar, or do I just enjoy nonsensical images of people's pants being on fire? You be the judge.

In Sunday's teleconference with reporters, coach Randy Edsall got into something a love spat with the media. Here is just a part of the dialogue (and if someone could let me know why block quotes don't work for me, that'd be nice too):

Q: "Before you consider moving Zach back into the starting lineup, what would he have to show you? Do you just want to see if he can..."

Edsall: [matter-of-factly] "Cody Endres is a starter. [six seconds of awkward silence] Zach Frazer hasn't taken a snap at all this week."

Q: "So even if Zach is 100 percent and plays well with the twos this week, there's no chance he could move ahead?"

Edsall: "I can't tell you that. The guy's questionable. Don't try to make something that's not there."

The media may have good reason to prod. You may recall last season, when Edsall could not have been clearer that either Frazer or Cody Endres would get the start at Syracuse, leading to the Tyler Lorenzen start that pitted Coach vs. Media in the least showdown-iest showdown ever.

Or, if you have the mind grapes of Neill Ostrout of the ConnPost, you're going all the way back to 2005 to point out that maybe, just maybe, the head coach is not above misdirection in order to confuse everyone.

In any case, expect fourth-stringer Johnny McEntee to start against Pittsburgh Saturday.

Chip's got your Lutrus and Endres tidbits, as well as an update on safety Aaron Bagsby, who will return from suspension Saturday and could start.

According to computers, UConn is ~40th-best in the country. That puts them solidly on the bubble for a 9- or 10-seed, I think.

UConn is ranked the 54th-best program of all-time, which is an absolute injustice. Ever since basketball began in 1986, there's no doubt that UConn has been the nation's best program. In fact, UConn should be ranked 0th.

And Syracuse 23rd? Get serious. There are six-year olds who have never seen the Orange make the Elite Eight.

Not exactly a new story, since this happened last week, but hell, any story that includes the extended phrase "encouraging for the Huskies in their pursuit of the 2008-09 high school National Gatorade Player of the Year" deserves a mention. On a related note:

Mike Anthony indicates that Knight won't be deciding anything until next semester. Mr. Knight, if you're reading, my birthday is in May. Just saying.

Everybody's favorite paisan, Geno Auriemma, is taking charge of the US women's national team through the next Olympiad. I imagine it's been difficult adjusting to coaching a team filled with the best players in the sport, as opposed to just the best players age 18-22 in the sport.

If you see a pertinent story that we might have missed, send it along to one of the e-mail addresses on the left.