Share All sharing options for: Coach Cal has a passion to lead for at least four more years 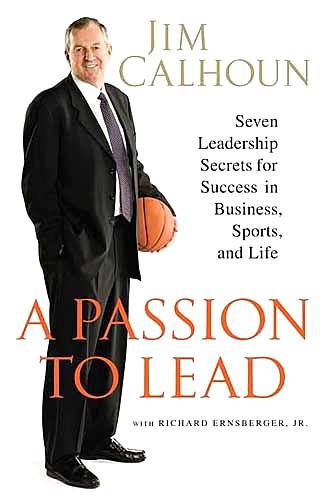 Coach Cal has a passion to lead ... and to write kick-ass self-help books.

Andy Katz's hair is reporting that Coach Cal and the university are negotiating a long-term contract that would be a "minimum of four years but could be as long as six."

The only problem? Katz is about four months late.

Although the news may come as a surprise to some, especially considering Cal is 67 and flirted with the idea of stepping down after April's Final Four, the prospect of a new contract has been bounced around since Cal announced his return for the 2009-10 season.

From a Courant story on May 27:

"Calhoun's contract says that 30 before the start of the final year of the agreement, Calhoun and the university 'shall commence the negotiation of two additional years of this agreement.' The final year begins July 1.

"Calhoun has not thought beyond 2009-10, but said his agent would likely speak to athletic director Jeff Hathaway in the coming weeks."

Katz's report is simply an update on the situation. Although he does provide a few new, albeit small, developments in the process. The first being that the two sides are, in fact, in talks to extend his contract, which currently runs through June 30, 2010 and pays $1.6 million a year.

And the other being the length of a new deal. It seems like Cal has been on Paterno Watch the past two or so years, as rumors of stepping down have swirled around before gathering local media for roundtable discussion to make his triumph comeback (and also hint at which players he's likely going to put on waivers). So the end, it has seemed, was going to come in the next year, two at the most. But Katz is saying that this new deal will be for AT LEAST four years, which would keep Cal at the helm into his 70s.

This is good news for UConn, as it postpones the threat of a Matt Doherty-type turnover a little longer. Even despite his age and lingering concerns regarding possible recruiting violations -- which no longer exist, right? -- he can still draw top recruits, as evidenced by the haul this year and ones he's wooing for the next.

Let's just hope this doesn't actually turn into a Paterno situation, where Cal becomes a character in the "B.C." comic strip, cracking jokes about social media devices, and also considering retirement for a decade. I don't want to have to write pieces like these in the future.