UConn 52, URI 10: The less said about this one the better

Share All sharing options for: UConn 52, URI 10: The less said about this one the better 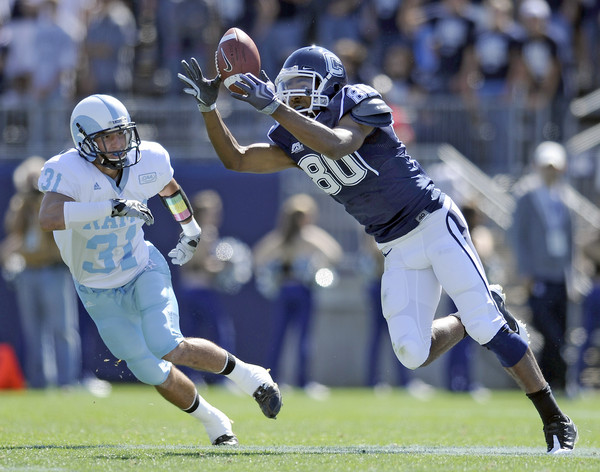 Michael Smith rushes the ball. ... Wait, it's not a run? A pass? The hell's a pass? You mean an inside draw, right?

It's pretty hard to come away from a 52-10 dismantling of a D-IAA team that used to be a rival (or so I've heard) unsatisfied.

But that's the beauty of UConn football: It's just full of pleasant surprises.

The Huskies opened the game nicely, needing just eight plays on their first two possessions to score two touchdowns (on drives of 66 and 43, to boot).

But then UConn began to show signs of the dropsees. Or, in medical terms, UConnitis.

Although they ended with three fumbles lost, I counted seven times the Huskies pull the ball on the ground before I stopped watching around the 2-minute mark in the fourth, no longer able to deny the man in a straw hat calling my name. Two of the drops came on blindside hits of Cody Endres (I miss you already, Jimmy Bennett); two on muffs by Japer Howard doing his best West Virginia circa 2007 impression; and another two by Desi Cullen, a reminder that his likable, hippie kicker routine is no longer charming if he keeps sucking.

But eventually, things began to snowball on Rhode Island again. Because, well, it's Rhode Island.

Even despite all the turnovers and miscues, the Huskies piled up NCAA Football-type numbers: 488 total yards, 289 passing yards (the most since a beatdown of Duke in the 2007 season opener) and seven touchdowns, five of which coming on drives of five plays or fewer. By the end, even Robbie Frey was breaking off huge runs.

But the problem with games like these is the positives aren't nearly as important (or interesting) as the negatives. Unless you're from the ACC, anything but a beatdown on a CAA team would be shocking, so the flaws and errors are really the only things that matter.

And there sure were a lot of them.

The one common thread among the seven fumbles was they all seemed to not be caused by the Rams as much as they were mistakes by UConn players (if that makes sense). Especially the ones on special teams, where the Kentucky Hammer and Howard just dropped seemingly easy catches; on his second muff, Howard tried to go all Willie Mays and catch it going the other way. Please stop this, Jasper. Also, your name sounds like a cat. Good talk.

Anyway, for a team that can only win if it doesn't turn it over, all these fumbles are a bit distressing. The Huskies probably could have won by about 70 if they didn't, and probably would have lost if they were playing an actual college football team.

Then again, they just won by 42 points. Methinks I should probably cut them a break. Especially since finding any inspiration to play in this game must have been near impossible. I could barely even watch most of the time.

In other news, UConn is now 3-1 heading into its first bye week, with its only loss coming to a then-ranked team by two points and with a Pitt team that has just been Wannestached on the horizon.

I really don't know what to make of this team and its future -- especially at QB, where there will probably be some baby mama drama, and sort of already has. But we'll save that for later.

For now, just give me my damn mutton trophy and we'll call it a day.