It was 40 years ago today

Share All sharing options for: It was 40 years ago today 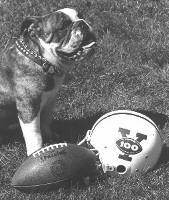 We here at TheUConnBlog strive to cover every aspect of UConn sports. However, seeing as Jim Calhoun has a longer tenure at UConn than any of us have on this earth, we are not exactly experts on UConn's history. So whenever we want to travel back in time, we dip into the bullpen and bring in Robert Porter, co-author of Hoop Tales: UConn Huskies Men's Basketball. Not incidentally, he is also my father.

On September 27, 1969, UConn beat Yale for only the second time in the two decades the teams had been playing. Robert Porter, then a UConn senior was at the game, and in honor of its 40th anniversary, he has provided us with a look back into UConn's football history and the story of the school's first (and perhaps only) real football rival, Yale.

"Leigh, don’t feel too bad. After all, you have the better band."

Leigh was my late father, the first of 3 UConn generations (class of 1936). Those not-so-subtle mocking words were spoken to him in the late 1950s or early 1960s as he walked out of the Yale Bowl after yet another moment of agony with UConn losing a very close game to the team from the university that more or less invented football (along with Harvard, Princeton and Rutgers). The man who spoke those words was one of many Yale graduates my Dad knew and worked with in his State of Connecticut banking career.

Kevin Meacham wrote a superb story on the history of the UConn-Rhody football rivalry, but as someone who has followed UConn sports his entire life, it was YALE, not Rhody, that was THE rival, and it was pure agony for UConn football fans, especially from 1956 through 1964.

You have to be around 50 or over to really have a memory of what this rivalry was once like. The UConn-Yale football game was always on the last Saturday in September and always in the Yale Bowl (Yale came to Storrs all of one time, early 1990s). It was the biggest sports event in the state for 30 years or so – roughly mid-1950s to mid-1980s. The only in-state sports event even close was the "Insurance City Open" golf tournament, as UConn basketball was very good in most years but not until the late 1980s did Husky hoops surpass the UConn-Yale football game as to state-wide interest.

The crowds were always between 30,000 and 40,000 - almost always on a sun-splashed early autumn afternoon, with the fans spilt 50-50 as to whom they cheered for. The UConn side faced the warm September sun in the "Bowl" which, when built in 1914, was the largest stadium in the world. More importantly by the mid-1960s Yale’s football record again in-state opponents was roughly 85-0. The zero is for sure, with Trinity and Wesleyan being the victims before UConn was scheduled as Yale’s annual opening game starting in the late 1940s.

UConn was not competitive for the first 7 or games or so, but look at the scores from the following games, starting from 1956 – the first football game I ever went to:

The years not listed were comfortable Yale wins, but the first three listed above were very memorable. UConn in that 1956 game was 6 feet way from an upset that would have been as large as Charleston Southern beating Florida this year (Florida 62, CS 3). Yale was listed in SPORTS ILLUSTRATED’S Top-10 preseason (then called the "Eleven Best Elevens"). While it was the opener for Yale, UConn had been routed at home to tiny Springfield the week before 41 – 14. Thus, Yale would have been a 5 or 6 touchdown favorite at a minimum.

When Yale scored a touchdown on a long run the 3rd or so play of the game, Leigh Porter and the UConn faithful expected a rout of 49 - 0 or so, but then something quite unexpected happened. UConn dominated the rest of the first half and shocked the crowd taking a 14 - 6 lead into the 3rd quarter. Two Yale touchdowns in that quarter put the home side back on top, but UConn, down 5 points, had a first down at the Yale 2 yard line with only seconds remaining and no time outs. Two running plays into the center of the line gained nothing and before UConn could get the 3rd down play off, the referee picked up the football declaring time had run out. Had UConn gained those last two yards, it would have been the biggest upset win by any team in UConn sports.

After that scare, Yale validated its lofty pre-season ranking going undefeated in the then big time Ivy League and 8 - 1 overall. But the close loss also turned UConn’s season around, which included a 71 - 6 rout of UMass.

The 1958 game was played in a heavy rainstorm, one of only two UConn-Yale games I was not present for between 1956 and 1982. It was the first game for both teams with the new rule of a 2 point conversation. Yale scored early on a 75 yard run, went for 2 and made it. UConn dominated the rest of the game but only scored one touchdown late in the game and missed the two point conversion to tie.

So by 1965, Yale’s winning streak against in-state opponents was well into the 80s. UConn football fans felt like Red Sox fans did through 2003 against the Yankees, and my Dad’s banking work with so many Yale graduates must have felt like a Red Sox fan working in Manhattan.

The game ball from the 1965 clash resides in the Donnelly Sports Museum on campus (and can be seen from a distance in this photo). Late in the 4th quarter of a 6 – 6 tie, UConn defensive back Gene Campbell intercepted a pass deep in Yale territory and raced in for the winning touchdown. While UConn rejoiced at the 13 to 6 final score, the Yale side was, of course, less pleased. It was the first game ever as Yale Head Coach for Carm Cozza, a future member college football Hall of Fame. That night Cozza received a telegram from a Yale alum, which read, "There is a train leaving New Haven for New York tonight at 9:15 - be under it."

Cozza was not the only coach from that day to achieve fame over a long career. There was also a first-year assistant coach on the UConn sideline. His name is Lou Holtz.

But that 1965 loss did not immediately end Yale’s dominance of the Huskies, as it continued for another decade and a half. After the 1981 Yale win, the series was 27 wins for Yale to 3 for the Huskies, but the two UConn wins after 1965 were memorable. Yale came into the 1969 game with the nation’s longest unbeaten streak of 16 (though tainted by the infamous 29-29 tie with Harvard). Yale ran the opening kickoff for a TD but UConn dominated for most of the rest of the game and won 19 – 15, a highlight of my senior year at UConn. The 1973 UConn team night have been the best of the 3 decade era of the 1950s through the 1970s. This was their most impressive UConn game of the first 30 against Yale. The Huskies won 27 - 13 and went on to an 8 - 2 season.

The tide finally turned for good in 1982. Yale was favored, but UConn won 17 - 7. For the remainder of the series, with rare exceptions, such as a Yale comeback in 1987, the Huskies dominated the team that had tormented them for over 30 years. The last time I was in the Bowl with UConn playing there was 1989, with the Editor of TheUConnBlog. He does not remember it, since he was not yet 3. Our seats were on the Yale side, and as UConn was rolling it up in the 2nd half, I remember behind us one Yale student talking to another and saying, "We shouldn’t be playing a team like THIS." I was tempted to turn around and say about 30 years before, that was also said, just the opposite way around.

Soon after Yale’s only visit to Memorial Stadium, which was another UConn win, the series was terminated. The football programs had gone in opposite directions, so ending it made sense for both schools. Part of the reason was that Ivy League graduate (Brown) Joe Paterno of Penn State led a movement to downgrade conferences from 1-A if their teams didn’t meet certain criteria as to stadium size and attendance. Yale on its own, would have qualified to remain in 1-A, but the other Ivies didn’t come close, so the whole league was demoted to 1-AA (where UConn was until early this decade), and Ivy League football soon vanished from prominence in the sport they invented.

Still for state of Connecticut football fans who annually spent those sunny late September afternoons tailgating in the one of the many lush grass parking areas around the Bowl, great memories remain. And much more recently, on the last Saturday of November in 2007, more than 100,000 people saw college football in the state – a sold out 40,000 at Rentschler as UConn dominated Syracuse while 61,000 were in the refurbished Yale Bowl where the undefeated Bulldogs had their season spoiled by Harvard.

That brings to mind a quote from my late Dad after one of those painful late 1950s or early 60s losses – "The day will come when Yale won’t be able to take the field against UConn." My Dad, who passed away in 1998, made several predictions well ahead of his time, and that was a memorable one. About 4 years ago when my brother and I were walking into the then new Rentschler Field for a Big East game, I turned to him and said, "After all the suffering Dad went through at the Yale Bowl, wouldn’t it be wonderful if he was alive and here to see this!"