Quick, quick. Everyone take a look at Wikipedia right now.

Share All sharing options for: Quick, quick. Everyone take a look at Wikipedia right now. 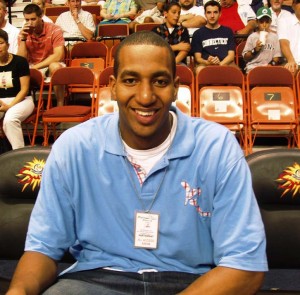 I think the Dove fascination is annoying, in most cases. This is not one of those cases.

I give you Wikipedia's page for the 2008-09 UConn men's basketball team. In this case, I've clicked on through to the subsection "Post-season awards." Read them carefully.

And I swear, if Mandeldove actually won that award, I'd be thrilled to offer my services to be the MC for his acceptance speech.

I had a sneaking suspicion that Jonathan Mandeldove was, in fact, the nicest fella to UConn's vast contingent of old fans. Now it's official. I assume that thousands of grannies the Dove has helped across the street are praising the award, which was apparently handed out over the summer.

As Porter noted to me in an e-mail, it might even be better than this page.

Lord, am I going to miss the Jonathan Mandeldove era.

UPDATE: Screengrab now included for posterity. Check it out after the jump. 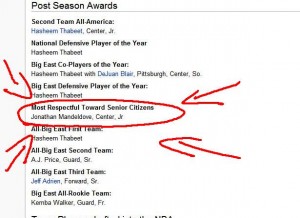