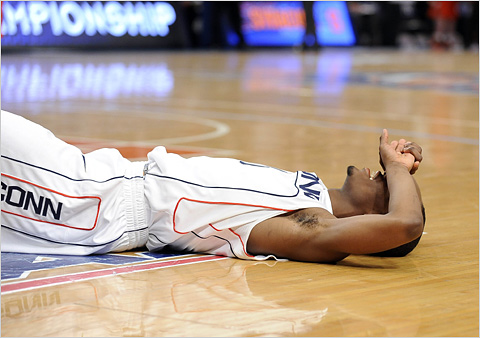 First there were T-shirts. Then came the framed box scores, its own website (complete with an intro voiced by the guy from "Behind the Music"), DVD, and game-worn jockstraps.

Although it wasn't worthy of one of those plasma ball lights that make up about 75% of Spencer's merchandise, the UConn-Syracuse six-OT thriller at last year's BET has been dubbed "THE COLLEGE BASKETBALL GAME OF THE DECADE" by the Sporting News.

Also noteworthy, Emeka Okafor was named to the list's college basketball all-decade second team, along with Shane Battier, Dwyane Wade, Blake Grifin and ... Stephen Curry? I guess they're not counting 2009 as part of the decade.

So fret not, Cal faithful.

You may have had to sit through almost four hours to ultimately have your heart ripped out, chopped into pieces and doused in pulp, but you're winners where it counts: obscure, completely unnecessary lists.

Six overtimes: Not just a game ... It's a movement