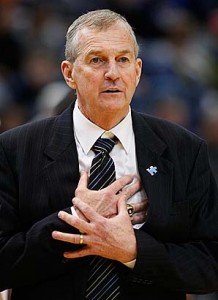 It's just good to see Coach Cal on top of one of our posts again.

A shocking development from Offseason Tease Jim Calhoun, as interpreted by the Courant's Mike Anthony:

As much as A.J. Price, Kemba Walker, Jerome Dyson, Stanley Robinson and Craig Austrie allowed UConn to play an up-tempo style, the group of Walker, Dyson, Robinson, Darius Smith and others make for an even quicker group. More press and fastbreaks are expected.

This marks the 18th consecutive season that Coach Cal has called for his quick, athletic team to press opponents and play an up-tempo style.

As usual, we will spend the next two months drooling over the possibility of a four-guard lineup like the one which pressed the hell out of Louisville last year in Freedom Hall. And then when November comes, the Huskies will be grinding it out by scoring in the halfcourt and on free throws.

Notes from Edsall's Tuesday media outing. Among the highlights: trying to convince everyone the URI game won't be a 45-point blowout. Expect LB Scott Lutrus to get a long rest before the Pitt game Oct. 10.

That story links to the BaylorFans.com message board, which had even me quite convinced Baylor would whoop UConn by 40. Last time I ever trust them.

Notable especially for a twist on Coach Cal's 'Compare everything to a former player' gambit.

Interesting look at the clusterf--- that is a 16-team megalith basketball conference.

Shocking, I know. Apparently losing the second-best player in America isn't a big deal when you return the first- and third-best players in America.

This is such a total non-story that it hurts my head, but if you've been following it, there's your conclusion. Courant saves face (barely), daughter gives UConn fans the Jackie-O tour of the women's basketball team next season.

If you see a pertinent story that we might have missed, send it along to one of the e-mail addresses on the left. I'll try to have this up a couple times a week going forward.