Share All sharing options for: Elsewhere On Stadium Road 9/22: Introductions 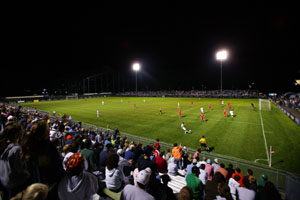 As you may be aware, fellow UConn blogger Ian Bethune of Sox & Dawgs abruptly shut down his site over the weekend, which is truly a shame. Although he is a dirty, dirty Red Sox supporter, Ian's site was pretty much a one-stop shop for UConn sports news, and he was generous enough to link to our blog quite often.

One of S&D's main features was "Paw Prints," a single daily post filled with links to all sorts of UConn news. For a while now, I've wanted us to do some sort of similar feature so that UConn fans might find this blog as useful as they do hilarious (note: your mileage may vary on hilariousness).

Now that S&D appears to be no more, someone may as well be of service to UConn fans patrolling the interwebs. Of course, the three of us are, in no particular order, lazy, snarky or a basketball-only fan. So this week will serve as a sort of test-run for two new (potentially) regular features: Elsewhere On Stadium Road (that's this post) and TheRoundUp.

Stadium Road, of course, is home to (one side of) Gampel Pavilion and the Sherman Football Complex, as well as most of the other athletic stadia UConn teams call home. EOSR will keep you up-to-date on UConn's non-football, non-basketball teams.

Now, I know what you're saying: "I've never seen a women's ice hockey game in my life! Why should I read this?"

Because you bleed national flag blue and white. That's why. Because every time you hear about an obscure UConn team doing well, you hum a couple bars of the fight song in your head. Admit it.

As an added bonus, EOSR will give me the chance to mock the universities who choose not to spend their budgets on an all-around quality athletic program. Take that, Georgetown field hockey!

We'll start this feature tomorrow with a look at how well the four fall team sports have fared early on, and will appear whenever the Huskies have a game of any kind.

The other feature, TheRoundUp, is what it sounds like: a daily news round-up for the big-money sports. There are plenty of news stories that just aren't big enough for TheUConnBlog's patented 1,000-word missives, so we'll try to touch on all of them here.

Jesus S. tried something like this before, but it's something of a time-consuming process. So I'll give it a shot starting tonight and we'll see if it sticks.

And of course, if you see a story that we missed, e-mail tips are always welcome.

We thank you for your continued patronage of TheUConnBlog. Tell a friend.