Share All sharing options for: New offense looks quite familiar 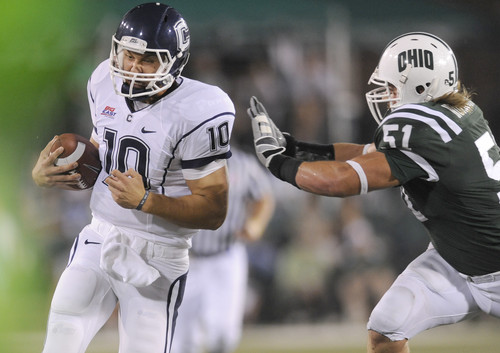 Zach Frazer running for his life. A sight we should probably get familiar with.

A lot was made of the Huskies' new offense coming into the season.

After four seasons in the offensive dark ages under Rob Ambrose, when the team was forced to read their stone tablet playbooks by candle light, UConn was finally going to rejoin the rest of the nation in the 21st Century. And Joe Moorhead was the one who was supposed to lead us to salvation.

Not only did the former Akron coach know what a forward pass was, he knew how to employ it: In 2008, his second with full control of the offense, Moorhead guided the Zips to the nation's 46th-best passing offense and the 36th-best scoring offense.

Throw in a four-star receiver with SEC speed, a QB that transferred from Notre Dame and a stable of quality backs, and the Huskies' offense had the chance to be potent and, most importantly, different.

But in the debut of Moorhead's "multiple no-huddle" attack, the only thing different was the name. The results, unfortunately, were starkly similar to last season:

Some of the expectations of the new offense were probably outrageous; every one was so thrilled that the team was actually going to change following last year's debacle, we expected an offensive revolution when Edsall was only thinking minor adjustments (i.e. going no-huddle). Eventually, people began throwing terms like "spread" around, when that was so far from the truth. (I thought I spotted some "Pistol" formations, though.) And with Edsall in charge, perhaps we should have been more realistic.

So, in that sense, we probably would have come away from Saturday's game disappointed no matter what.

But the one thing Moorhead and Edsall did promise was balance. And there was none of that in Ohio.

As the chart above indicates, the Huskies' pass/rush ratio was almost the same as last year. To be fair, the ground game was just as good Saturday with the two-headed monster of Jordan Todman and Andre Dixon as it was last year with the NCAA's best running back (statistically). But the QB play, as well as the coaching staff's willingness to throw, was right in line with last year. And that similarity is not one to be proud of.

"Balance is yards to him not run/pass."

That's not what balance means, Randy.

But if I were Edsall or Moorhead, I probably would have limited the number of passes on Saturday, too.

Even more depressing than the play-calling was the play of Zach Frazer, who filled Tyler Lorenzen's shoes quite nicely, finishing the day with 127 yards, two TDs and three Ints. As previously noted, Frazer didn't have much help from his receivers, which dropped and bobbled even simple catches all day. But his passes also sailed high and wide all night. Even in his biggest throw of the game, a 35-yard pass to Brad Kanuch in the end zone, was pretty rough: Kanuch had his man beat with no over-the-top help, but Frazer underthrew him a bit, forcing Kanuch to stop and fall to his knees just inside the goal line.

That's being picky, sure. But it was also far from encouraging, and only leaves a glaring question heading into Week 2: If Frazer struggles to hit wide-open receivers in stride against Ohio, what's going to happen when conference play starts?

Most are willing to cut Frazer some slack considering this was his first season as the No. 1 guy in a brand new offseason. And I understand that. But he played significant minutes in three games last season. This isn't some completely green QB.

And I would have been able to deal with a poor statistical night. That would have been fine considering the circumstances: first game, first road game, new offense, etc. But he made every pass he threw look difficult, and not once showed anything that relieved any worries I had about him heading into the season.

I'm not willing to give up. Not yet. But if these trends continue, I may be hopping of the Frazer bandwagon in the very near future.

And despite what's been said and the numbers from last game, I actually have faith in Moorhead, too.

His play-calling was very Ambrose-tastic. But the new OC has said that the offense would have "multiple" looks and would change formations, style, personnel, etc., based on what the defense was showing.

From a Conner preseason feature:

"You just don't want to pigeonhole yourself into saying, 'Hey, we're going to line up every play, every game and be four wide receivers and one running back.' There are situations or games that dictate whether you're going to need to use more of one grouping or one formation than another. A team may defend the four-wide set real well in one game and the two-back, one tight end set not so well. We want to take advantage of the defense's weakness. The next week they may not defend four wides well but defend the pro set well. Multiple allows you to take advantage of the defense's weaknesses and be aggressive."

Based on last year's numbers, the way to attack the Bobcats' D was on the ground. Ohio finished 81st in run defense and 51st in pass efficiency defense a season ago. And with seven returning starters on defense, no new tape to watch, a veteran offensive line and two potential all-conference backs, you have to think the team felt that was the best approach, too.

So perhaps it was just this game, just this team. Perhaps Moorhead will see something in the Tar Heels' D and completely flip the script. Maybe he'll deploy five wides and sling it around the field all game.

Then again, that type of wishful thinking kind of got us into this mess in the first place.