Share All sharing options for: Lutrus Watch: Update No. 2 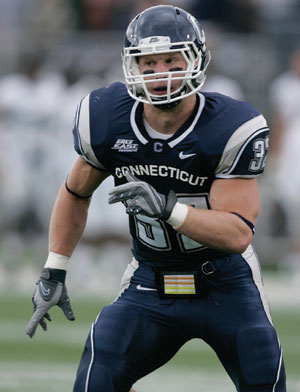 The Lutrus Watch has hit DEFCON 4.

In our last installment, we saw young Scott Lutrus rearin' and ready to play Saturday in the Huskies' home opener against the Heels.

But Randy Edsall pulled out his No. 2 pencil and gave the Connecticut media a sharp "Not so fast" on his weekly teleconference Thursday.

According to Desmond Conner, Lutrus is now officially a "game-time decision."

Sounds pretty ominous. But this is probably just another Edsall psyche-out move, especially since Lutrus himself already told UConnReport.com that he'd be in uniform.

In fact, there's a good chance that no one simply alerted Edsall to Lutrus' comments, and the coach thinks he's crafting this ingenious plot to fool UNC into thinking it will be without one of its most important players. Then, when they least expect it (probably sometime betwen leg stretches and taking a pre-game lap) -- BAM! Knocking people unconscious left and right.