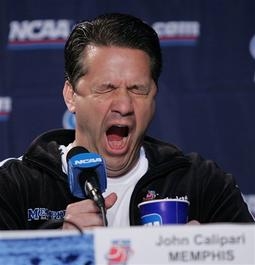 Fake Coach Cal is excited about the prospect of a pulverization at the hands of @RealCoachCal (follow him on Twitter).

Aside from their Dec. 9 showdown against The Fake Coach Cal in MSG (the unofficial start to the season) the first month-plus is nicely frosted, and there aren’t any truly arduous stretches throughout the 4 1/2-months worth of play.

UConn has to take on Cincinnati, Notre Dame, Georgetown and Pitt in four of its first five conference games, with just two (Irish, Panthers) at home – giving the student section its final chance to make new fat joke for Luke Harangody. (Savor the moment, kids.) And at the end of the season, it’ll get West Virginia, Louisville and Notre Dame again.

Tough stretches, sure. Just not soul-crushing.

But from a viewer’s stand point, it’s definitely one of the best in recent years.

In addition to an always-interesting Big East season, the Huskies get to play out-of-conference games against Kentucky, Texas and Michigan, with the latter two at Gampel. The Texas game has the potential to be one of the best of the college season, depending on how things shake out. And to get it at Gampel instead of the Morgue is just the tops.

Plus, if the season turns out to be a complete disaster, the team plays South Florida in its final game. So, you know they’ll go out with smiles. And isn’t that why they play anyway?

Full schedule after the jump: