And now, a view from Tarheelia

Share All sharing options for: And now, a view from Tarheelia 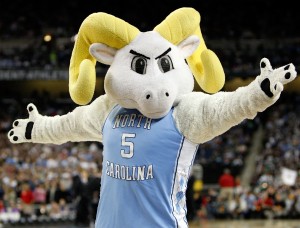 Alternate questions for this Q&A: A ram? For the Tar Heels? I never understood that.

We may not have made this clear, but this Saturday is sort of a big game for Connecticut's fourth-favorite football team. The Huskies host North Carolina, the highest-ranked OOC opponent UConn has played at home since it joined the Big East. OK, so maybe that's a lot of qualifiers, but it's still something of a big deal.

To help UConn fans learn a bit more about this week's opposition, I've enlisted the thoughts of AEM, the proprietor of the nifty UNC blog, The 5th Corner. Check it out (and also the 5th Corner Twitter) for your Tar Heel news and views, or if you just really, really like Roy Williams.

Incidentally, I answered some of AEM's questions about this week's showdown, which you can read here. On with the questions, below the jump:

The sky is the limit? I am not sure I am ready to say that ... yet! This year North Carolina has had a few set backs on the OL with injuries in the preseason, and with the top three wide receivers from last year are now in the National Football League it's tough to think about anything but a good, solid season, but nothing more. So for now I am thinking that this team is bound for: having a winning record and going to a bowl game, definitely not what I would consider "the sky is the limit" material. However, if the offensive line can still gel with the new members, which includes a freshman and the wide outs, which features no seniors on the two deep, can be an asset and not a liability, maybe not the sky but the top of the division could be a reality.

I had to think about the record for a long time. Last year the team went 8-5, losing a heart breaker in the Meineke Bowl [31-30 to West Virginia]. Without the same type of wide receivers and a somewhat shaken up O-line gave me some worries, enough to think the team could drop two more games than last season. With a good defense, as I thought it would be, maybe one of those games could be regained back. That is why my 6 or 7 wins prediction.

The line still needs gelling, but being able to open up the opposing defense so that three backs could gain over 40 yards each and over 250 overall, is not a bad day's work. The wide outs need some work, especially with their hands (as they dropped a half dozen passes), but as I said before, with no senior on the two deep roster, you have to believe they will improve as the season goes on. Having said all of that I am going to say that the 6/7 wins prediction should be achieved and even surpassed, but I will be more confident of saying surpassed once I see the game between UNC and UConn.

On offense I will give you three:

T.J. Yates, the quarterback of this squad. Hurt for part of last year in 2009 this is his team. He wants to lead this squad, more importantly, he can lead this team. Last week's number were not impressive for the junior, going 9 for 20 for 114 yards 2 TDs and an interception, but remember that the wide outs had six drops, making his stats a bit skewed. No doubt in my mind that in order to have a good running game the Heels need to be able to throw as well, which means Yates is going to have to get his 20-25 passes a game, and will have to do it with an offensive line that is still working out the kinks.

I will not be surprised if coach Davis uses the three backs the same way against UConn as he did against The Citadel, so while I speak of Draughn, any of the three running backs could be the one getting the load this week. Without a doubt if UNC wants to make it to a bowl game this year one of the above mentioned players need to be a top contributor for the Heels each and every week.

Greg Little, not sure if I can say the top wide receiver, but I can say the one with the most experience. He had a couple of catches (and one drop) last week for 31 yards and a touchdown. Nothing special by any means, but junior wide out might be needed to help the younger players during practice as he is needed to catch passes in the games. If the receiving core will grow the credit will go to the coaching staff, but underneath it all it some of those youngsters will thank Greg Little as well.

On defense I could just say the whole defense and I would not be exaggerating, since this is the unit that is going to make or break the Heels in a lot of ways this season. However if I have to give you a couple here they are:

Marvin Austin (Jr.), defensive tackle and E.J. Wilson (Sr.), defense end. If The Citadel only got 8 first downs in the game it is because of the defensive line and how well they played. Austin and Wilson are major parts of that line.

But if that is not enough for you, that same line allowed a grand total of 30 yards (on 20 carries), and once again it was the above mentioned players that anchored that stinginess. Having a player on the outside and one in the middle of the trenches that should be double teamed each and every play makes it so that the rest of the defense can do as they please, which is exactly how week one went for the Carolina D.

North Carolina will win this game if the running game works well. This will give T.J. Yates a chance to do play action and get an extra second or two to throw the ball to the wide outs.

North Carolina will lose this game if UNC's defense does not live up to they hype against UConn. Winning games means winning the battle of field position, a good defense can help with that.

I am going to go with North Carolina beating Connecticut. The spread as of right now is UNC a four points favorite, I think that they will win the game by a bit more, 31 to 17, but with the game being way too tight in the first half.

Thanks to AEM for answering the questions, and make sure to check out The 5th Corner.