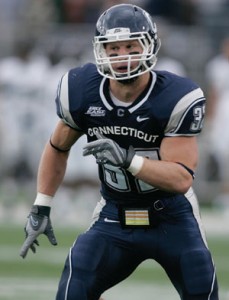 Backup linebacker Sio Moore should be out for a little while, but Scott Lutrus was expected to be ready to go Sunday after what was initially diagnosed as a stinger.

And while Edsall said Lutrus was at Sunday's walkthrough, he wouldn't say if he took part in it.

Could be nothing. Most likely is nothing.

Then again, we've been through this before.