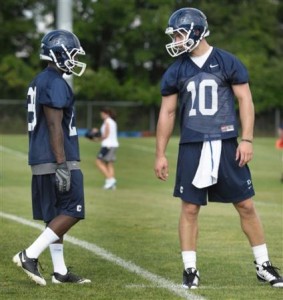 "Hey, Jordan, you and Andre's shoulders OK from carrying the offense?"

A win is always 100 percent better than not-a-win, so in that sense UConn's season-opening 23-16 victory over Ohio Saturday night was good.

In some sense, though, such a dull victory was the worst kind of win, reminiscent of stinkers from the lost 2006 season against Indiana and Army. Sure, it counts the same whether UConn won by 7 or 70, but tonight's performance was worriesome, to say the least.

For all the ballyhoo of a new offensive system, not much seemed to have changed substantively. It was still the same conservative, run-first gameplan hamstrung by poor quarterback play and some inexcusable drops by the wide receiving corps. (It's important to note that the 'run-first' part isn't bad at all, unless it's combined with the other two parts.)

Luckily, UConn has an (underrated, almost criminally so) offensive line and a pair of talented running backs that were up to the task Saturday.

Jordan Todman (25-157, TD) and Andre Dixon (19-100) made things look easy, and UConn's O-line pushed around the Ohio front four to the tune of 5.3 yards per carry. As I said in the preview, while Donald Brown was good, he had help. I think UConn will be just fine with the Todman-Dixon 1-2 punch in the backfield.

Extensive kudos to the defensive line as well; not only did the front four lead the charge in containing Ohio's rush attack (32 rush, 61 yds), but DE Lindsey Witten almost singlehandedly kept the Bobcats from making the game even more interesting; his safety gave UConn a 16-7 lead in the third quarter, and he sacked Ohio QB Theo Scott on back-to-back plays on the Bobcats' last meaningful drive.

The secondary gave up too many big plays for my liking; I'd have to actually see the game (no streaming video for me, just WTIC), but it sounded like the safeties were getting burnt fairly often. That's something to watch going forward, especially once the D-line starts going up against a bigger, stronger offensive line.

No, what scares the hell out of me is Zach Frazer. I'm a fan. Really. Have been since he announced he was transferring to UConn. But tonight was an undeniably poor performance by the UConn QB.

Frazer spent most of the first quarter winging ducks in every possible direction before hooking up with fullback Anthony Davis on a short touchdown pass. Frazer finished just 11-for-24 for 127 yards, with a pair of touchdowns but three picks, plus a fourth turnover on a fumbled center exchange.

It was painful to listen Joe D'Ambrosio describe pass after pass hitting the turf not even in the vicinity of a receiver. But it's just one game, and he'll have a chance to redeem himself at the Rent next Saturday.

And to be fair to Frazer, he didn't get much help from the wideouts. Two of the three interceptions could have been caught, and Brad Kanuch dropped a wide-open pass in the second quarter. (He made good by catching a 35-yard TD later in the period.) Dwayne Difton was a non-factor, catching two balls for seven yards, but the radio announcers made it seem as if he was getting open whenever he faced man coverage. A good sign going forward, once Frazer gets his timing down.

Other positives from the passing game: TE Ryan Griffin (2 rec, 26 yds) made a couple big catches in the second half; four wide receivers caught a pass (yay!), and Frazer's two TD passes are just one short of Tyler Lorenzen's team-leading three from all of last season. Baby steps.

Hopefully, Frazer was just feeling some combination of opening-night jitters and unfamiliarity with Joe Moorhead's offense. I think he's a better quarterback than his 4-9 career TD-INT ratio shows; but he needs to get better a lot quickly if UConn is going to compete with the better teams on their schedule.

Special teams was mostly dreadful, as usual. A missed field goal and two kickoffs out of bounds. Desi Cullen made up for the latter with a nice couple of punts which were crucial in winning the field position game, so the unit wasn't a total washout. And at least the punt protection kept any punts from being blocked. Sunrise, sunset.

Now, here's where we think big picture: UConn avoided a trap game (and an ESPN-certified "upset special") and got a road win it should have expected to get. They'll likely be an underdog the next two weeks, but they now only need a split of UNC/Baylor to set them up for a solid season.

Without four turnovers and all kinds of passing-game miscues, Ohio doesn't stay within 20 tonight. At the very least, that's encouraging. But those turnovers happened, this game was still sort of in doubt late in the fourth quarter, and the 'pray the defense makes a play' blueprint for victory stubbornly sticks around.

At the same time, 1-0 is 1-0 is 1-0, and there are far worse things than winning ugly against a mid-major; like, say, losing to William & Mary by two scores at home.