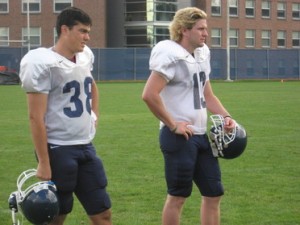 I would absolutely watch a sitcom based on Desi Cullen's haircut in this photo.

As part of TheUConnBlog’s 2009 football Season Preview Week, we’re rolling out the position primers and opponent capsules. Today, we wrap up the players on the field with a look at the special teams.

Previously on TheUConnBlog: Let’s say that there’s a mythical father-son tandem somewhere in Everytown, USA. For the sake of the story, the father is a decent parent – he tries to keep the son out of trouble, to keep his son from costing him money, time and aggravation. And everything would be working out fine, except for the fact that his otherwise-normal son is a huge klutz.

He trips over himself, falls into puddles at random, never found a bench he couldn’t trip over. The father becomes exasperated trying to figure out ways to keep the kid from breaking a leg just about every day. Finally, he decides that the kid just needs constant supervision.

So he works with the kid, tries to teach him how to avoid crashing his bike into telephone poles, how to stop spilling soup on their dog, and to never play lawn darts with the neighbor boys. Finally, after some time, the kid starts to get the message and does his best to be more aware of all the pitfalls we experience every day.

And you know what happened to that kid?

He was actually dead the whole time.

Wait … what? Sorry about that. Where was I? Oh yeah - a somewhat-apt metaphor about UConn’s kicking-game woes over the past few years. Between blocked punts, missed field goals and occasional return-game clusterf---s, UConn has a ways to go to get to respectability. Luckily, it appears that Randy Edsall has targeted the problem, and as it turns out, there’s some reason to believe this unit can learn to avoid falling on its face as it did so many times in 2008.

The depth chart (2008 numbers in parentheses):

Athlon: Does not rank the Big East special teams; no Huskies on the first or second all-conference teams

Our outlook: If the quarterback position has been an Achilles’ heel in recent years, the special teams have been shin splints: painful to watch, and you never know when they’re going to get better. Although in fairness, the dark days of missing extra points and shanking kickoffs out of bounds seem to be past.

Teggart was a relative God-send over the second half of last season at placekicker, making all 11 field goal attempts from inside 40 yards (his two misses came from 42 in the bowl game and 53 against Pitt). He’s a kid with a strong, accurate leg who has a maximum range of about 55, judging by pregame warm-ups. Realistically, he appears to be a solid bet from 50 yards and in.

Cullen, the owner of the greatest self-given nickname in UConn history – "The Kentucky Hammer" – has a solid leg, averaging 40 yards a punt. That average includes the two blocked punts credited to Cullen (the other four, as well as two other punts, are credited to "team"; no idea how that is sorted out). Protection was obviously a major issue last year, but if the line gives Teggart and Cullen the time to do their thing, that’s about as solid a 1-2 punch as you’ll find in the Big East.

To Randy Edsall’s credit, at least he’s taking charge and working to fix last season’s missed assignments, and Cullen vows that he’ll get rid of the ball quicker. Whether those flaws are fixed remains to be seen, but at least there’s reason for optimism.

The return game is less solid, but still decent. Jasper Howard still has his issues with handling punts, and he needs to make better decisions on when to fair catch and when to let a ball bounce, but he’s got the speed to bring back fond memories of Larry Taylor.

Losing Darius Butler (23.5 yds per return) hurts the kick return game, and you have to wonder if Jordan Todman can return kicks and get a full workload at tailback. Robbie Frey, at least, had the Huskies’ longest kick return last year (54 yards) and figures to get plenty of touches as a specialist. The kick return unit figures to be the weakest area of the special teams, unless Edsall can wrangle a couple spare wide receivers with blazing speed and vision.

Overall, special teams should be much improved; at the very least, I expect that they will be good enough to not put the offense and defense in terrible situations most games.