Share All sharing options for: Price signs with Pacers 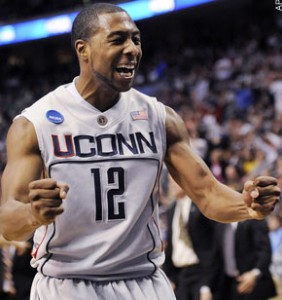 A.J. Price has found a home in the NBA, according to the Courant's Mike Anthony. Price, who was the 52nd pick in the draft, was signed by the Indiana Pacers to a multi-year deal, though terms have not been announced. By my rough estimation, Price's signing raises UConn's total of NBA players to 13. I could not find any up-to-date ranking of schools based on alums playing in the NBA, but I believe UConn's 13 should be good for at least the second spot.