As part of TheUConnBlog’s 2009 football Season Preview Week, we’re rolling out the position primers and opponent capsules. Today, we look at the Huskies’ eleventh opponent: the Syracuse Orange.

Astute readers may notice that this is my first post of Football Preview Weekish. Why is that? The answer, dear reader, is that of the two men and one fictional character that write for this blog, I am by far the least informed about football. This is not my fault, I was raised as a UConn fan after all. However, even I, neophyte that I am, can tell you this one thing: Syracuse is terrible.

Now, long-time readers will note that there is no love lost between this organ and the Syracuse University. But that does not mean my opinion is tainted, consider this: Over the past four years, Syracuse has gone 10-37. Last year they lost to Akron (!) a 5-7 MAC team that Temple (!) beat 27-6. But perhaps the most telling fact is that Syracuse was only able to beat a deeply awful Notre Dame team by one meager point. Yes, they really were that bad.

However, there is some good news for Syracuse. The Orange did finally fire the incredibly inept Greg Robinson. There really is no downside to that move, but that does mean a team that was terrible last year will once again be terrible, but this time with a rookie head coach and a new playbook.

And last, but certainly not least, we need to discuss the Quarterback, one Mr. Greg Paulus. The former Duke Blue Devil and erstwhile quarterback has decided to take another stab at football. He has not played in four years, though, as you can see from the above video, that does not mean he has forgotten how to take a hit. Good luck with that.

For the full breakdown, hit the jump.

Fan forum: Troy Nunes Is An Absolute Magician; Troy Nunes is probably the best place to start, especially since it hosts the wonderful Octonion, but really Syracuse offers a wealth of choices to suit any masochist's taste (check the sidebar on the left side of this page). In addition, I'd be remiss if I did not mention our frenemies over at Hoya Suxa, which is easily the funniest place in the Big East. (Make sure to check out their annotated version of UConn's most recent TV ad.)

2008 record: 3-9 (Tripped over own feet in bathroom, cracked head on toilet bowl)

Notable wins: Uhhh.... The 28-21 victory over equally putrid Louisville? The aforementioned squeaker against Notre Dame? Not really a lot to go on here.

Notable losses: If by notable, you mean expected, take your pick of the nine, though again, they lost to a below .500 MAC team, so maybe that takes the cake.

Key players (offense): First off, watch to see how the Paulus experiment goes, other than that, Syracuse has three members of the O-Line and TE Mike Owen. I'll just quote Syracuse.com on this one: "The offensive line, the team's annual Achilles' heel, is another matter. Marrone and line coach Greg Adkins spent the better part of spring ball and preseason camp hammering home the principles of their approach to line play and at times appeared frustrated with the lack of progress. As camp ended, though, the tone shifted to optimism. Coaches and players alike agreed that the system was taking hold and producing positive results. How much it takes hold will go a long way toward defining the 2009 season."

Key players (defense): DT Arthur Jones (60 tkl, 3.5 sacks). Again, from Syracuse.com: "The SU defense has forced only 30 turnovers in its last 24 games, the most glaring evidence of its increasing passivity toward the end of the Robinson era. Last season it recovered only eight fumbles and intercepted only eight passes. It recorded only 16 sacks. That's a lot of "onlys."

The Huskies win if: They arrive at the stadium.

The Boneyard melts down if: Syracuse stays within 21 points.

Bottom line: Syracuse is a bad football team. Not only that, they are a bad football team learning a new playbook from a first-year coach and starting a QB that has not played football in years and up until 6 months ago was the most-hated player in college basketball.

They say a picture is worth a thousand words. I think this one will suffice: 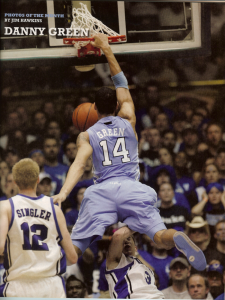