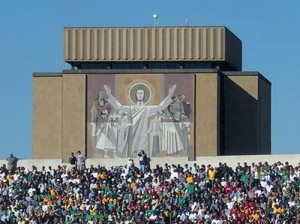 Much better than Field Goal Buddha.

As part of TheUConnBlog’s 2009 football Season Preview Week, we’re rolling out the position primers and opponent capsules. Today, we look at the Huskies’ tenth opponent: the Notre Dame Fighting Irish.

My first awesome sports memory came in 1993, at the tender age of six. I was at my cousins’ house, watching "The Game of the Century" between No. 1 Florida State and No. 2 Notre Dame. I had no college football team at the time – on Saturdays up to this point, I was paying more attention the various NickToons and other things of childhood. And Rutgers was terrible. Even as a six-year old, I knew that.

But, being a football fan, I got caught up in the hype. I don’t remember anything about the game except for the last play: Charlie Ward’s pass knocked down, just short of the end zone. 31-24, Irish. Rejoicing. The underdog Irish had won, and they were on top of the world. I knew almost nothing about Notre Dame, except for the almost mystical, reverent tones of the commentators. And that blue and gold looked really cool. So I jumped on the wagon.

Then the following week, with Notre Dame just one win away from playing for a national title in the Orange Bowl, they completely blew it against Boston College. Glenn Foley, you rat bastard.

I was hooked. Sixteen years later, I haven’t given up my Irish addiction, despite my adoration of all things UConn. All of this is to say, to UConn fans, I’m sorry for what is beyond the jump:

Fan forum: Irish Envy; Also, a plug for Blue-Gray Sky, one of the best college football blogs out there, and essential reading for those of us of the Irish persuasion. They’ve been previewing all 12 Irish opponents position-by-position, so head there if you want an outsider’s view of the Huskies.

Notable wins: 27-21 at Navy (Nov. 15). Sadly (or not, depending on your perspective), this was Notre Dame’s biggest win last year.

2009 outlook in 50 words or less: If you hate Notre Dame, you’ve enjoyed the Irish bottoming out since the end of the 2006 season. However, the Irish now have one of the most experienced offenses they’ve ever had. A relaxed schedule means they could have an outside shot at 10 wins and a BCS trip this year.

The Huskies win if: They come out angry over the now-scrapped series with the Irish, in which none of the games were to be played in Connecticut. If there’s one thing that motivates players, it’s administrative minutiae.

The Boneyard melts down if: After an ND touchdown, Charlie Weis sadistically burns a Big East flag, much like Sgt. Slaughter did to the banner of Hulkamania 20 years ago.

Bottom line: Few college football teams cause as much controversy and hand-wringing as Notre Dame. Some love them and regard the Irish as the keepers of college football history; others hate the elitism of Irish fans and their (if you don't mind an obnoxious generalization) bandwagon-ny nature when things are looking up. USC fans, on the other hand love Notre Dame because they’ve been an easy victim six out of the last seven meetings.

UConn fans now get to experience this firsthand, what with the acrimony over Notre Dame’s perceived bullying of UConn into accepting a six-game series with no games in Connecticut. Not that Huskies fans need other reasons to hate the Irish; ND’s refusal to join the Big East in football – while their non-revenue sports benefit from inclusion – is a sign of selfishness and clinging to a golden age that is forever gone. (Whether that’s "bad" is another point.)

All of which makes Nov. 21 possibly the most interesting game in UConn football history.

The Irish haven’t beaten anyone of note (read: a ranked team) since the 2006 home opener against Penn State, but they’ve also been starting freshmen and sophomores since the Brady Quinn era ended in January 2007. All those players have experienced and matured, with the result that the Irish are likely to start 15 juniors and seniors this year.

Their offense is loaded for bear, with all-time hype champion Jimmy Clausen surrounded by all kinds of talent; three quality receivers (Tate, Floyd and Duval Kamara combining for 126 catches, 2,005 yards and 18 TDs), a shifty and quick little RB (Allen, 5-foot-10 and 195 lbs, ran a 4.34 40) and an offensive line featuring five highly-touted upperclassmen and eight of the 10 names from last year’s two-deep.

On defense, the Irish will have to perform better than they did during the five-game stretch (from the Pittsburgh game to the USC game) in which they allowed 175 rushing yards and 27 points per game. The defensive line is young and questionable, but the back seven are rock-solid, including one of the best defensive backfields in the country (three starters returning from a team that allowed under 200 passing ypg).

Of course, unlike past years, the real key to Notre Dame’s BCS hopes is the schedule. Only USC was ranked in the preseason top 25; the schedule is littered with Pac-10 patsies Stanford, Washington and Washington State, Big-10 also-rans Michigan and Purdue, as well as the customary win over Navy. Things tend to get tricky when the Irish play Michigan State (lost nine of last 12) and Boston College (lost six straight), but if the Irish are as good as I think they are, 10-2 is absolutely not out of the question. A BCS title game appearance probably is.

Since I have two horses in this particular race, I’m probably equally optimistic about both teams. And when in doubt, I’m taking the team with more talent – especially if that team is at home. Given how good Notre Dame is likely to be (or given how much coverage there's going to be if the Irish totally flame out), it would be monumental for the UConn program to win in South Bend in 2009. I don’t see it happening.