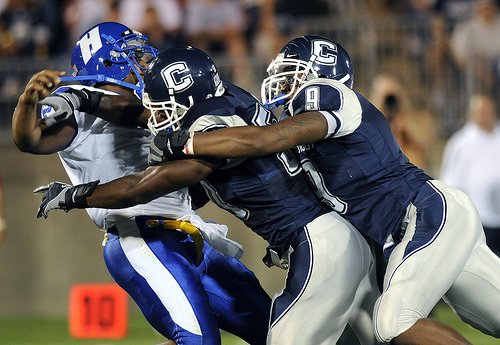 Lindsey Witten can no longer piggy-back Cody Brown for his numbers. Or for fun.

Playing in the immense shadow of George Selvie, it was near impossible for any Big East player along the defensive front to assert himself. Even though the South Florida defensive end finished 2008 with just 5.5 sacks, his reputation following a 14.5-sack ’07 and his immense pro potential propelled Selvie to a second straight All-American nod.

But even though he never truly received the attention he probably deserved, even from UConn fans, Cody Brown’s senior season was (statistically) far better than the one turned in by Selvie, and probably better than any other pass rusher’s in the conference.

Not only did Brown tie for the conference lead in sacks (11) with Cincy TE/DE/PF Connor Barwin, he also finished the year with the most solo sacks (10) and the second-most tackles for loss behind Big East defensive POY Scott McKillop, with 16.5. (As an aside: McKillop had 17.5 tfl on just four sacks, showing what a force he was last season.)

And on top of all that, Brown tied the school record and ranked eighth nationally with five forced fumbles, he blocked a punt, recovered a fumbled and also had eight pass deflections en route to becoming a unanimous first team All-Big East selection.

By all estimation, Brown’s season was the best by a defensive lineman in this new era of UConn football. The only one that comes close would be Tyler King’s nine-sack 2003.

Coming off an 8.5-sack year in 2007 (one better than Brown), Julius Williams had six sacks, good for sixth-best in the conference (one spot ahead of Selvie); the only pass-rushing duo better than Williams/Brown was Cincy’s Barwin and Lamonte Nelms, who finished 17.5 sacks between them, a half a sack better than the 17 Williams and Brown combined for.

And even then-junior Lindsey Witten finished eighth in the league in sacks/game with five while playing a backup role in only 11 games.

Still, even with Brown, Williams and Witten, the team finished third in the conference in sacks, with 32, and tied for 40th in the nation with an average of 2.23/game.

The problem was outside of the trio of Brown/Williams/Witten, the rest of the defense produced just 10 sacks. Aside from the big three, only six UConn players recorded a sack in ’08, and only one (Marcus Campbell, who is ineligible for this coming season) had more than 1.5.

The biggest issue was that the team got almost no pass rush from any one in the back seven. Of UConn’s 32 sacks, only two came from players not on the d-line (one apiece from Lawrence Wilson and Greg Lloyd). By comparison, Cincinnati had six sacks come from back-seven players. Not a huge difference, but enough to make the jump from an above average pass rush to elite.

Still, the rest of the defensive line wasn’t much help either.

After dealing with the incredibly ineffective DT combination of Alex Polito and Rob Lunn, a much better blogger than player (allegedly), the team eventually made the switch to the more, um … athletic combo of then-redshirt freshmen Twyon Martin and converted DE Kendall Reyes.

And even though the switch was made well into the season, the Martin/Reyes combo nearly doubled the efforts of Polito/Lunn, as the former combined for 42 tackles and three sacks while the latter produced only 26 tackles and one sack. The numbers of Martin/Reyes weren’t amazing, but they much better than the players they unseated and enough to spark optimism and expect a bigger jump this season.

But regardless of who was in the middle, the one thing the Huskies’ front four excelled in (statistically) was stopping the run.

UConn allowed, on average, just 109.8 yards per game, good for second best in the conference and 16th nationally, a stark upgrade from the previous year when it allowed 157.4 yards per game, which placed it 62nd nationally and sixth in the eight-team Big East.

But not to be the eternal pessimist, it’s worth pointing out that the Huskies benefited from playing some pretty terrible running games. Of the 12 1-A teams they faced last year, seven were in the bottom half of the NCAA in rushing offense. And against four of the five in the top half (West Virginia, 15; Baylor, 21; USF, 44; Louisville, 46), the Huskies allowed over 120 in each, and more than 215 rushing yards twice. The only time they really kept a decent running game "in check" was by holding Syracuse to 96 yards on the ground. And, well, it’s Syracuse. So even that could go into the negative pile.

So I’m not sure if the team really shut anyone down on the ground as its high rankings would lead you to believe. It merely did an okay job half the time against good running attacks and boosted its stats by feasting on some pretty pathetic ground games. I’m looking at you, Virginia (108th), Cincinnati (95th) and Rutgers (80th). Oh, and the Huskies also gave up 128 rushing yards to Temple, the worst rushing team (109th) it faced all year. Just sayin’.

But, all in all, the team was still solid defensively, especially for a Big East team (the ultimate backhanded compliment).

The team’s pressure may have come from only two players, and the run defense probably wasn’t as good as it seems on paper, but they still finished as the best defense (statistically) in the Big East, and the sixth-best defense in the country.

Even with all the caveats thrown in there, that’s pretty damn impressive.

In losing Brown and Williams, the team loses not only their two best defensive linemen, not only two of the best pass-rushers in the conference, but two of the best rushers the team has had in the last decade, perhaps even longer.

But the good news is they still have Witten, who may have the ability to be better than either.

That may sound like a bold statement given what’s already been said about Brown’s fantastic season in 2008. But just consider the fact that Witten finished a sack shy of Williams’ total playing in two fewer games, 11 fewer stats, and most likely much less playing time.

If there were a football equivalent to John Hollinger’s PER, Witten’s would be pretty high. And with a full season as a starter, he could have the breakout year that was predicted for him after he was thrust into the starting lineup for six games as a true freshman.

The problems will come from the other end of the line, where the Huskies are not only starting a true freshman, but are also backing him up with one.

Jesse Joseph and Trevardo Williams may be incredibly talented, and after enrolling in January, may also have more experience than your av-er-age bear. But they’re still freshmen and will likely struggle. Which means Witten may receive a heaping dose of double teams throughout the season.

And that makes the progression of the Martin/Reyes DT combo in year 1.5 that much more important.

A lot is being expected of the redshirt sophomores this season, especially after impressing many by replacing two veterans as freshmen. They’ve shown the potential, but with so much in flux this season, they need to produce this year for the defense to have any success at all.

Defensive tackles aren’t usually seen as sack machines. But with both ranging in the 270-290 pounds range, I don’t know how many blocks they’ll be occupying; Terrance Codys they are not. For their seasons to be successes, they’ll need to use their quickness and what have you in order to get after the quarterback and rack up some higher sack totals.

The more I study the defensive line, the more I’m learning how much of an impact the ineligibility of Marcus Campbell will make. Campbell was merely a decent rotational player in 2008. And both Trevardo and Joseph may even be more talented than him. But having someone like Campbell with any type of college experience under his belt would ease my mind, and Witten’s.

The play and development of the defensive line is inarguably the most crucial unit on defense next season because so much is in flux. In fact, it may be the only unit with relatively any type of turnover.

The linebacking core has been around for so long, it seems like Wilson and Scott Lutrus should be applying for AARP card. The secondary may have a redshirt freshman starting at SS, but they have 45 starts between the three other starters. Plus, Aaron Bagsby could ultimately take Jerome Junior’s spot when he gets back from suspension.

But the defensive line must replace all four opening-game starters from a year ago. Reyes, Martin and Witten all have some experience, but there’s a big difference between starting half a season and starting all 13 games.

If things come together and all that talent turns into production, the team could have another top-15 or so defense on its hands.

If not? Well, we all know how those seasons end.