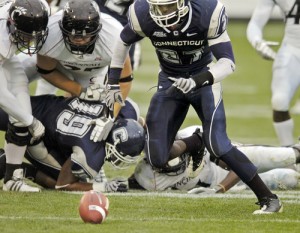 As part of TheUConnBlog’s 2009 football Season Preview Weekish, we’re rolling out the position primers and opponent capsules. Today, we look at the Huskies’ ninth opponent: the Cincinnati Bearcats.

In the long and storied history of college football teams who lost to UConn in 2008, Cincinnati is inarguably the best.

It starts at the top with coach Brian Kelly. With a lifetime record of 169-57-2, and 0-1 vs. UConn in 2008, Kelly is one of the Big East’s hot coaching properties. He won national championships at D-II Grand Valley State, and in just five years on the D-I level, he’s won conference titles at Central Michigan and Cincinnati. While he did lose to UConn in 2008, Kelly has pushed the Cincinnati program from C-USA also-ran to regular BCS hopeful.

Nothing, not even a complete thrashing at Rentschler Field in October 2008 could stop the Bearcats from winning the conference, where they lost to Virginia Tech in the BCS game. It should be noted, however, that Virginia Tech only beat them by 13 points and the Bearcats were minus-3 in turnovers (as opposed to UConn’s 24-point margin of victory and plus-6 turnover advantage in their 2008 game).

The Bearcats return eight starters from an offense that averaged 26 points per game (though just 16.0 ppg in games against UConn in 2008), including QB Tony Pike. Pike began 2008 as a third-string quarterback promoted to the starter due to injuries, not unlike UConn’s Cody Endres, who threw for 196 yards in UConn’s 40-16 win over the Bearcats last season. He ended it a full-time starter averaging 240 yards per game and being named second-team All-Big East,

His preferred target, Mardy Gilyard, is back this season after a year in which he caught 81 passes for 1276 yards and 11 touchdowns, one of which came in the loss to UConn in 2008. A 6-foot-1, 187-pound burner who was named the Big East Special Teams Player of the Year – beating, among others, Jasper Howard, who recorded one of three interceptions of Pike in the 2008 UConn-Cincinnati game – Gilyard figures to be a first-team all-conference candidate at wideout this year.

The Bearcats return a stable of competent tailbacks; Jacob Ramsey and John Goebel each rushed for more than 600 yards. Though neither is Donald Brown (he of the two rushing TDs in UConn’s 40-16 victory over Cincinnati in 2008), it should be enough to keep defenses honest.

On the other side of the ball, though, CB Aaron Webster is the only returning starter. The defense allowed 20 points per game last season – inflated by giving up 52 to Oklahoma and 40 to UConn on Oct. 25, 2008. Whether they can match that number in 2009 could determine whether they avenge their 40-16 loss to UConn in 2008 and win a second straight Big East title, or whether 2009 season will be as crazy as 2008.

A season in which the Big East conference champions lost to UConn, if you hadn’t heard.

2009 outlook in 50 words or less: The defending champs are confident that they can repeat, with a really solid offense coming back. Defense is a little questionable, and they’ll be tested by Rutgers, Oregon State and Fresno State in September. In the mix for a conference title, but likely to take a small step back.

The Huskies win if: They get over the ghosts of Nippert games past (a million injuries in the 2005 loss, a total mudhole-stomping in 2007), the defense can come close to matching their 30 rushing yards allowed from last year’s win, and the secondary limits the dangerous Pike-Gilyard combo.

The Boneyard melts down if: The Huskies’ plus-6 turnover margin from last year’s game evens out.

Bottom line: I’m less optimistic than most about the Bearcats’ chances of repeating as conference champion. Not only because they lose 89 percent of their defensive starters, but also because they’re likely not to go 6-0 in games decided by eight points or less this season. True, Cincinnati was minus-8 in turnovers last season, but that essentially amounted to a minus-9 combined mark against UConn and Virginia Tech.

There’s also the matter of four Big East road games (including dates with USF, Rutgers and Pittsburgh). Besides that, Cincinnati has a tough early schedule, which will make adjusting to 10 new defensive starters tricky.

Still, I love what Kelly’s doing, and the Pike-led offense is (relatively) good enough to keep them in every game. And this is a conference where everybody outside the bottom two (or three, if this wasn’t TheUConnBlog) are pretty much equally likely to beat each other on any given week.

For that reason, despite my homerish placing of the Bearcats in sixth place in the SoBE Power Poll, Cincinnati has as much chance as anybody to win a free trip to Miami in January. Given that, and a 10-2 record at Nipper Stadium under Kelly (losses by 4 and 5 points to Louisville and West Virginia in 2007), and it would be tough to predict a UConn victory there. So I won’t.