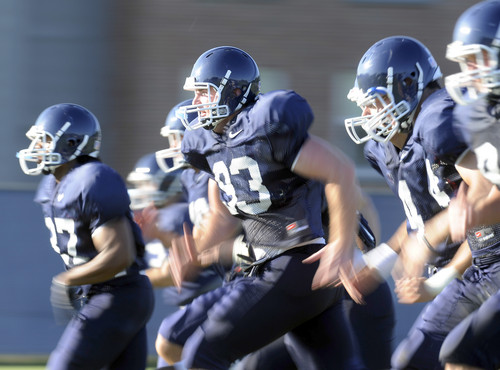 These players sort of look like offensive linemen. That'll do.

As part of TheUConnBlog’s 2009 football Season Preview Week, we’re rolling out the position primers and opponent capsules. Today, we look at the offensive linemen.

Previously on TheUConnBlog: Offensive linemen are kind of like weathermen.

Unless you are one, you don't really know the criteria for becoming a successful one.

Last season was especially perplexing. Donald Brown rushed for 2,038 yards, averaged 160.23 yards per game (good for best in the country), scored 18 TDs and pretty much carried the offense to its second straight bowl game. But how much of that success can be attributed to the offensive line?

Brown obviously had a special season, finishing the year as the best runner in college football (statistically).

But, as people tell me, the line wasn't exactly devoid of talent.

Although he never exactly played like it at UConn, Will Beatty was a second-round pick of the New York Giants; center Keith Gray made it to camp with the Panthers; and redshirt freshman guard-turned-center Moe Petrus was named a freshman All-American by various publications.

And even with Andre Dixon and a less-awesome Brown in 2007, the Huskies were still able to provide a successful ground attack. With relatively the same players up front two seasons ago, the Huskies finished a respectable 49th in rushing.

So it seems the line was always above average. The emergence of Brown and another year of experience turned them into an elite one last season. I think.

But perhaps more impressive was what they did in pass protection.

With the QB carousel in full motion essentially the entire year, the Huskies improved from 77th in 2007 in sacks allowed to 14th last year.

Now, it’s important to note that the dominance of the run game and the ineptitude of the passing attack probably had teams stacking the box and encouraging Lorenzen or whoever to throw. Which, in theory, should make passing and pass protection a bit easier. But the offense only attempted 48 more passes than the year before, so the jump (fallback?) in national ranking is still quite impressive.

In conclusion, I still have no idea if UConn had a good offensive line. But I think so.

Again, I’m not sure how, exactly, a good offensive line impacts a game, I just know that it’s important.

And by all accounts, last year's group was important.

But while the team loses two of its biggest contributers in Gray and Beatty, the line still has a chance to be pretty good.

Although Edsall’s recruiting efforts have been lacking in some places, the team has built a lot of depth in the trenches on both offense and defense. And for the second year, the Huskies won’t have to undergo a major transition on the offensive line.

Gray, a captain in 2006 who somehow lost his captaincy in ’07, was an integral part of the team’s success up front. But Petrus is a rare talent. And although he drew the ire of Edsall a few times during summer camp, he could actually be an upgrade.

The biggest loss will be at left tackle, widely considered the most important spot on the line. Because not only does the team lose Beatty, it also will be without redshirt freshman Jimmy Bennett, who is out for the year with a knee injury.

Bennett was only going to be a backup to Dan Ryan at LT, but he may have the most raw talent of anybody up front, as evidenced by his high rating (for UConn) coming out of high school and his quick ascent up the depth chart. Although he lost the battle with Ryan for the starting spot, I have a feeling it came down to experience, something the fifth-year senior Ryan certainly had a lot of.

But even without Bennett, the Huskies can still be good up front.

With Brown no longer in the backfield, expectations have to be tempered a bit. But with Jordan Todman and Dixon, there’s still enough talent there for the team to at least finish among the top 50 in rushing like it did in 2007.

The biggest obstacle will come from the team’s new no-huddle attack. While Edsall plans on using a heavy rotation in the skill positions, there won’t be any subbing up front, as coaches usually preach the importance of linemates playing next to each other for a good amount of time. And for a group of road graters, the lack of a break in between plays should be especially taxing.

Still, the team has had a few months of conditioning to prepare for the challenge ahead. And with the talent they return up front, the offensive line should be able to pave the way for what should be a greatly improved offense.