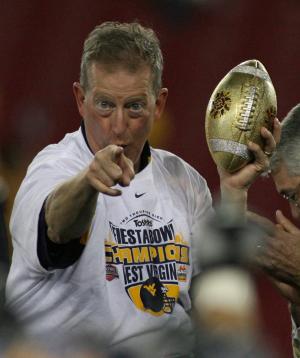 Bill Stewart wants you to read this interview.

As part of TheUConnBlog’s 2009 football Season Preview Week, we’re rolling out the position primers and opponent capsules. Today, we look at the Huskies’ seventh opponent: the West Virginia Mountaineers.

West Virginia has had its way with UConn ever since the Huskies joined the Big East. Since then, the teams have played five times, with the Mountaineers winning each by an average of 27 points.

In order to better understand just how the ‘Eers have been able to manhandle the Huskies, I scored an exclusive interview with Mountaineers head coach Bill Stewart. Enjoy

Receptionist: Welcome to West Virginia, home of the Mountaineers. May I help you?

Receptionist: Is this about the couch again? Because I told him not to go near it with the matches ag–

TheUConnBlog: No, no, no. I have an interview scheduled with him. I’m from TheUConnBlog.

TheUConnBlog: Yeah … I think that’s me.

TheUConnBlog: Well, there’s only one of me. But thanks for taking the time to speak to me, Coach.

Stewart: You can call me Stew. My compadres call me "Big League Stew" sometime, ya know? He, he. But I like just Stew just fine, thank ya.

TheUConnBlog: Okay … Bill. Uh … I’m calling from a UConn sports blog, so naturally I was hoping to talk to you about the success your team has had against the Huskies.

Stewart: Ohhhh, Randy’s bois. Boi, I’ll tell ya, Randy Edsall is one of the nicest coaches this side of the ‘ssippi. Every time we come up to Sin-sin-ad-ee, man, they give us a workin’! Them are some hard workers, and it’s just a pleasure to be playing with those fine boys up ‘dere.

TheUConnBlog: Well, it’s Connect … never mind. Anyway, I was wondering how your team was able to beat them so handedly? I mean, 66-21 – that’s some beatdown.

Stewart: Yeah, we got ‘em pretty good, I ‘spose. But an 11-point win ain’t too much for the old blue and gold. Especially when you play fast and LEAVE. NO. DOUBT.

TheUConnBlog: Yeah. Ummm … So what was it? Something you guys were able to exploit schematically? Was it just Pat White?

Stewart: Pat White. … Man! What a QB! I just don’t think there’s ever been a better player for the old blue and gold. He was such a competitor. Such a dadgum competitor. Kid had all the moxie and the play-fast and get-after-it you can ask from someone in the old blue and gold. And he never left his wingman! You know … I just miss him so much sometimes. … I get a ‘lil choked up thinking about how he’s no longer ‘round these parts.

Stewart: Have you ever read Uncle Tom’s Cabin?

Stewart: What about Pat Boone?

TheUConnBlog: Well, that’s not a story. And I think you mean Daniel Boone. Pat Boone was a singer.

Stewart: Yeah! That guy! Anyway, as legend has it, Davey Boone and his big blue ox, Baby, was planting apple seeds on the West Virginia country side when, all of a sudden, he stuck his big ax into the ground and struck enough oil to the lubricate the world! And with all that lube, Paul, Pat and Baby sold their diamond mine and funded the construction of West Virginia University! Mountaineer pride, baby! Woo!

Time/TV of game: Both TBA

Fan forum: Blue and Gold news; and I keep the Smoking Musket in my daily blog rotation.

2009 outlook in 50 words or less: Without Pat White and four-fifths of their offensive line, the Mountaineers may finally join the also-rans in the Big East. Still, with Brown, Devine and a solid D, they may end up representing the conference in the BCS.

The Huskies win if: Jarrett Brown is less than three-eighths the player White was, if Devine is on the injury list, and the ghost of Pat White stays the f*ck away.

The Boneyard melts down if: Pat White somehow scores again.

Bottom line: This may be the year.

Don’t get me wrong. I still think the Mountaineers will win by about 20. But this year marks the Huskies’ best chance at beating the one Big East team it still hasn't beaten.

In its first year in the post-Pat White era, West Virginia faces a lot of hurdles. Not only must it replace one of the best college football players of the past decade and with a mere mortal, it also lost four starters from an offensive line that was considered one of the best in the country.

And with the team already averaging 15 fewer points a game than in the RichRod years, it seems like this may finally be the year the Mountaineers fall from their perch atop the conference and force Coach Stew to finally shower.

The again, the team continues to recruit better than anyone in the conference, Brown is probably a better fit if they want to sling it around more and, most importantly, they still have Noel Devine, the only marquee offensive player in the conference and the only player I can love and hate at the same time.