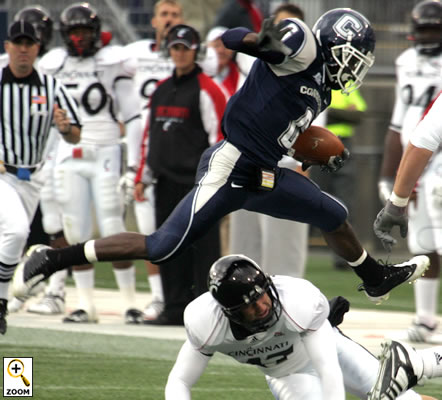 Jasper Howard cares not for your gravity.

As part of TheUConnBlog’s 2009 football Season Preview Week, we’re rolling out the position primers and opponent capsules. Today, we look at the defensive backs.

Previously on TheUConnBlog: Wherever he is -- in his dorm room, watching "Beaches" on VHS or asking for extra queso on his burrito in the Student Union -- Jonathan Jean-Louis weeps.

When asked how he’s doing, he’ll say "comme ci comme ca." But his soul is screaming out, "c’est terrible!"

With a hole in the linebacking core last season, the team decided to move All-everything SLB Scott Lutrus inside and bring SS Dahna Deleston down to take his place. The move, in theory, was supposed to put more speed on the field in order to combat the Pat Whites of the world.

That left Jean-Louis, a fairly big WR recruit out of Massachusetts who was apparently more rugged than a lumberjack, and Kjuan Dabney to fight it out for the vacant spot in the defensive backfield. But neither did enough to win the position, and Deleston was moved back to reclaim his throne.

But Jean-Louis got a second chance this year. With Deleston gone and Dabney at linebacker, the starting SS spot was his for the taking. Everything was magnifique.

But when the two-deep for Saturday's opener was released yesterday, it was the depth chart. And Jean-Louis was left drowning his sorrows over a box of crepes.

Our outlook: First there was Tyvon Branch in 2007. And then, Butler last year. Now, the pressure is on McClain to carry the torch from the UConn defensive backfield into the NFL.

That’s unlikely, but after serving as the nickelback behind Howard and Butler a season ago, McClain has shown he has the talent to be a more than capable starter. He may not be as consistent as either in coverage, but he flashed the ability to make the big play when UConn was up 20 and needed to further crush teams' spirits.

But it’s Howard that will inherit the No. 1 corner position from Butler. You can argue that it was Butler’s ability to shut off a team's top threat that allowed Howard to make the flashy plays last season, and there’s some doubt as to whether he can do it without his pro counterpart. But I don't think there's much to that. Howard really seemed to emerge last season, and he certainly has the attitude necessary for the position.

With McClain and Howard as its top two, the team may struggle against some of the bigger receivers in the conference. The 5-11 Butler wasn’t Manute Bol, but he often looked like it next to McClain and Howard, both of whom are favorably listed at 5-9. Howard was matched up against 6-9 Josh Chichester last season, and the Cardinal had his second-best game of ’08, hauling in seven passes for 63 yards.

Most teams won’t have a behemoth like Chichester, but it’s something even 6-2 receivers can exploit.

At safety, Vaughn won’t intercept seven passes like he did in 2007, but he’ll be his usual, consistent self and should again end up on the all-conference team baring any injuries.

Junior, though, is a huge question mark. A lightly recruited linebacker coming out of high school in Baltimore, he spent last season on the scout team. And all offseason, it seemed like Jean-Louis was the favorite. So it doesn’t sound like he really wowed the coaching staff so much they had to clear a path. He could merely be who they had to settle on because of a lack of options. Could be wrong, but that’s how it seems.

Regardless of his raw talent, there’s going to be some type of learning curve in just his second season in Storrs and his second season at the position. Let’s just hope it only takes a beatdown of Ohio for him to work out all the kinks.

Still, even with Junior, the team boasts one of the better secondaries in the conference. And with talented freshmen Blidi Wreh-Wilson and Dwayne Gratz fighting it out for the nickelback role, it looks like it could stay that way for sometime.