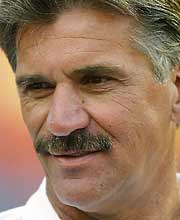 "The Wannstache" is a drama in three acts.

As part of TheUConnBlog’s 2009 football Season Preview Weekish, we’re rolling out the position primers and opponent capsules. Today, we look at the Huskies’ fifth opponent: the Pittsburgh Panthers.

A brief scene from my upcoming screenplay:

[Fade-in on an older, white-haired man consoling our protagonist in his office. The protagonist, DAVE, looks frantic and inconsolable.]

Marv: You need to calm yourself. Put the razor down.

Dave: You have no idea what I’m going through. I bring in some great kids every year – I’ve had one of the two best recruiting classes in the Big East every year since I got here. And what do we have to show for it? Five wins, six wins and five wins. Yeah, we won nine games last year, but we blew it at home against Rutgers. And at Cincinnati.

Marv: Oh, I know all about coming up short when it matters. Sure, I'm a much better coach than you, and my teams lost four straight Super Bowls with one of the best quarterback/running back combos of that era! But enough about me. You were down 21 against Cincy, true, but you only lost by seven. It wasn’t that bad. And they won the conference…

Dave: Every year, we lose at least one stupid game we shouldn’t. And then our fans boo me and say I can’t coach. I’m too conservative, they say. I always play not to lose and it always backfires. What if they’re right?

Marv: Ignore them. All it takes is one brilliant season and they’ll worship at your feet. And hey, you play in a pretty bad BCS conference, so you’re always in Orange Bowl contention.

The Ghost of Adlai Stevenson: You can’t let those losses define you. I lost to Dwight Eisenhower in every single thing I ever did. Poker, presidential elections, bake sales, everything. And I turned out just fine, minus the dead thing. You just need to be you.

Marv: Yeah. Being conservative ain’t the worst thing in the world, either. Think of all the losers in history who were too aggressive, and then they end up embarrassed with a lost empire and a kidney stone.

Napoleon III: Oh, come on! I’m just minding my own business here! And no one in America has ever even heard of me.

Dave: I love my team this year, and I think we could do some good things.

Dave: I think I’ll give it one more year.

Fan forum: Inside The Huddle

2009 outlook in 50 words or less: Wannstedt has turned solid recruits into wizards of underachieving for four years. Pitt fans won’t be too patient if they come up short again. Solving the QB question and overcoming the loss of LeSean McCoy to the NFL are going to be the early storyline.

The Huskies win if: They are the lucky ones chosen to play the antagonist role in the same-old-Pitt "WTF game" in cavernous Heinz Field. In recent years, the Panthers have lost there to a middling Rutgers team, Bowling Green, Navy and UConn.

The Boneyard melts down if: Zach Frazer completes 75 percent of his pass attempts to Pitt players, as he did last season.

Bottom line: For what it’s worth, I picked Pittsburgh to win the league in the Big East blogpoll, while the media apparently follow my every thought and agreed.

Eight starters return from the team that finished 28th in the country in total defense last year. The Panthers have a beastly defensive line including Romeus (in addition to his 7.5 sacks, he also blocked three kicks last year, two of which came against Rutgers), a second-team All-Big East selection a year ago. The defense could be the best in the conference and one of the better units in the country.

The offense is a bit more mysterious. Pitt fans appear to be jubilant over the departure of offensive coordinator Matt Cavanaugh, and they hope for a more creative scheme under new OC Frank Cignetti, who worked in the same position for high-scoring California last year.

The quarterback position appears to belong to senior Bill Stull, although Pat Bostick (1,500 yds as a true freshman two years ago) is still in the mix and probably a better backup than anyone else in the Big East. Who knows what to expect from the backfield, where not only McCoy but LaRod Stephens-Howling and FB Conredge Collins are gone. Pitt’s leading returning rusher is wide receiver Aundre Wright (5 rush, 34 yds), and four inexperienced backs are battling for the starting spot.

That defense is a monster, though, and it may not matter how good/bad the Panthers’ offense is. As such, UConn’s trip to Heinz Field seems destined to go much more like the 24-0 drubbing in 2005, rather than the 34-14 win in 2007.