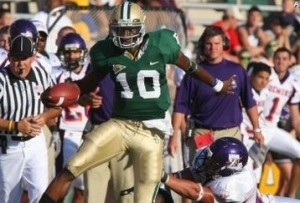 Robert Griffin has not quite escaped the bounds of physics. Give him a year or so.

As part of TheUConnBlog’s 2009 football Season Preview Week, we’re rolling out the position primers and opponent capsules. Today, we look at the Huskies’ third opponent: the Baylor Bears.

Baylor nearly came out of the Rent with a victory last year; it took a clutch fourth-quarter touchdown drive (capped off by a short Donald Brown run) to show the Friday night ESPN crowd that the defending Big East co-champions were slightly better at home than the 10th-best Big 12 team. You also might recall this game as "The Night Of A Million Slants."

Then-freshman Kendall Wright (6 rec, 114 yds, TD) was on the receiving end of most of those wide-open passes across the middle of the field (two of which can be seen in the video linked above). While we have the luxury of knowing that Kemba Walker would probably lock Wright up on the court, there’s no such assurance that the UConn defensive backfield will do the same.

If you know one name on Baylor, it will be Robert Griffin, the quarterback who came in with head coach Art Briles last season and promptly rejuvenated a dead team.

A 6-foot-3, 200-pound athlete with tremendous speed and a solid arm, Griffin ran for nearly 850 yards and was responsible for 28 touchdowns.

While the Bears finished their customary 4-8 in the monstrous Big 12, they did keep it close with top-25 teams Missouri and Texas Tech, and all four wins were by 20 points or more. On the other hand, Baylor was even or better in turnover margin in all but one game last year; it took a couple bad Lorenzen interceptions to set up a pair of touchdowns in last year’s game in East Hartford. The Bears are better than last year, though, and hopefully the Huskies won’t be looking past Baylor to that showdown with Rhode Island.

2009 outlook in 50 words or less: Baylor has been bowl-less since 1994, but things are looking up. It’s too bad they’re in a six-team division with four top-25 teams, or else the Bears might have been able to make more noise this year. Robert Griffin is still going to make people look silly, though.

The Boneyard melts down if: Did you read that last bullet point? OK, to be fair, Griffin only ran for 46 yards, and it was only the pass defense that was frustratingly bad that night. And apropos of nothing, Griffin apparently thought the Huskies hit harder than Big 12 defenses.

Bottom line: Unlike last year, when most of the pregame fun came from outside, swordfighting sources, this year’s game figures to be more interesting. Baylor is an unfortunate team in that they have weapons to compete with most of the Big 12 (and probably most of the Big East), but they also get two guaranteed losses every year from the Red River juggernaut.

Still, Baylor has a decent shot at a bowl this year, though a win at home against UConn will likely be necessary to achieve that goal. Griffin is a terror that is going to get serious publicity; his 283-yard, 2-TD effort against Missouri is likely a sign of things to come. Given how close the Bears came to pulling the upset last year, and UConn’s historical struggles with running QBs, it’s not much of a stretch to imagine the home-field advantage becoming decisive.

Of course, if UConn wants to accomplish anything this year, they’re going to have to win a couple of these 50-50 games. It’s not difficult to see this game being a must-win if the Huskies split their first two games. A 1-2 start wouldn’t be disastrous – and nothing that couldn’t be fixed by winning at home – but this is really a game UConn should win. Either way, we’ll know quite a bit about the 2009 Huskies by the time their plane flies over the George W. Bush Parkway.