Share All sharing options for: Football Preview Weekish: The Quarterbacks 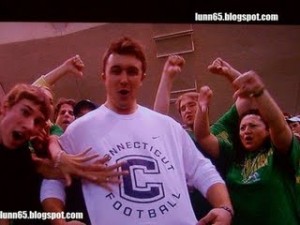 Strong arm and the cojones to wear that shirt in the ND student section? Sign me up.

As part of TheUConnBlog’s 2009 football Season Preview Week, we’re rolling out position primers and opponent capsules. Today, we kick things off with a look at the quarterbacks.

Previously on TheUConnBlog: One hundred and thirty nine point seven.

Eight months later, that number still forces me to vomit in terror. No, it’s not how many International Bowl T-shirts sold to UConn fans last January.

139.7 represents the Huskies’ average passing yards per game in 2008. That number placed the Huskies in 110th place out of 120 I-A teams, behind such luminaries as Western Kentucky, Indiana and Boston College (who was playing their 12th string quarterback at one point last season). Of the 10 teams who ranked below the Huskies, four of them run some form of the triple option and one was Syracuse.

Only New Mexico and Army threw fewer touchdowns than UConn’s five; yeah, even the four option teams threw as many.

Pretty embarrassing. And that’s before getting into some of the finer details.

Such as: the 34-10 loss to Pittsburgh last December on Senior Day, when ESPN announcers rightly joked that UConn had more basketball national titles (seven) than completed passes that day (six). In a performance that could only be described as "car-crash-tastic," Tyler Lorenzen and Zach Frazer combined to complete 11 out of 31 attempts – six to UConn receivers, five to Pitt players.

Last season, three gentlemen manned the QB position in at least five games, and only one of them – Frazer, the four-star Notre Dame transfer – topped 100 yards per game. When the International Bowl came around, Randy Edsall and Co. finally went all "screw this noise" and limited the passing offense to six attempts.

Regular UConnBlog whipping boy Lorenzen started 10 games, completed 48.8 percent of his attempts and is now, karmically, in the NFL learning how it feels to try and catch bad passes. Frazer and Cody Endres figured into big wins over Louisville and conference champ Cincinnati, respectively, although each struggled with turnovers and accuracy.

Frazer’s got the starting nod – and my heart – unless something drastic happens, and with a new offensive coordinator and a new hurry-up, spread-ish system, there is actually some optimism and excitement at the QB position.

The depth chart (2008 numbers in parentheses):

2008 low points: Just about every other moment, although I’ll list two that stand out especially:

Just goin’ off popular consensus: ESPN: ranks UConn’s quarterbacks sixth-best in the Big East, above Louisville and Syracuse, but oddly still below Jabu Lovelace and the Funky Bunch down in Piscataway.

Phil Steele: The guru has UConn fifth in the league, ahead of RU, ‘Cuse and UofL. Money quote: "Let’s face it, the Huskies’ QB numbers can only improve."

Athlon: Sixth in the league. Ho-hum.

Our outlook: Last year, amazingly, UConn ran an offense straight out of 1910 and won eight games because of the talents of Donald Brown and his friends on the offensive line. Now, without Brown, a lot of the offensive burden will be transferred to Frazer. If he gets into a groove in OC Joe Moorhead’s no-huddle system, UConn might become a balanced, quasi-dangerous offense that doesn’t need to rely on wacky defensive and special teams touchdowns to beat teams. Or it might not. Admittedly it is tough to tell in August.

Needless to say, I’m bullish and I say Frazer can do it. The kid’s a four-star prospect with a gun and the most accurate long ball we’ve seen since Dan Orlovsky. Not that that’s saying much, but still. Frazer has lost eight pounds this summer and appears to be doing everything he needs to in order to get better.

If he falters, Endres is a decent backup, and walk-on Johnny McEntee will forever be a legend in my mind, thanks to his mythical performance in the spring game. The future looks decent, if early reports on true freshman Michael Box are to be believed.

What worries me is the coaching staff’s inability to develop quarterbacks over the last five years, as well as – more worryingly – his inability to develop wide receivers to actually catch the ball. The latter is beyond the scope of this mini-preview. I have a feeling that, by the end of the year, we’ll chalk the former up to a couple years of simple recruiting incompetence.

Zach Frazer throws a better ball than Matt Bonislawski, D.J. Hernandez and Tyler Lorenzen. (Although at least in practice, apparently, Endres is throwing a prettier ball.) He’s already as accurate (55.4%) as Lorenzen was in Lorenzen’s one useful year (56.8%), and outside of the Pitt disaster, he was generally an OK decision-maker.

In Frazer’s second year as a starter, you would think the decision-making can only improve. And it appears – not to tip anything from future previews – that he’ll get some help at wide receiver, too. I’m clearly a convert to the Church of Zach already, but the promise is there for anyone who watched last season.

UConn has had five years of inconsistency at the most important position on the field. This year, for the first time in a while, the team’s success hinges on production from the QB. If Frazer can improve as expected, the offense could be solid and it will be a bowl year. And if he’s as good as I think he is, look out next season.