Share All sharing options for: Football Preview Weekish: Ohio U. 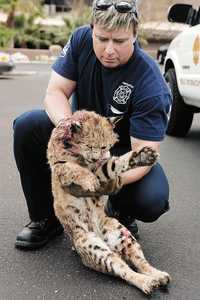 As part of TheUConnBlog’s 2009 football Season Preview Week, we’re rolling out the position primers and opponent capsules. Today, we look at the Huskies’ very first opponent: the Ohio Bobcats.

The beginning of the regular season is a bull market for clichés. Since no games have been played, coaches can’t quite take it one game at a time; but rest assured, this last preseason week will be spent getting focused. Meanwhile, the team is full of impact players who bring a lot to the table, and the effort level is getting dangerously close to 110 percent.

If you wanted to really stretch, you might even get some mileage out of the old "the more things change, the more they stay the same" chestnut. After all, the Huskies will end the 2009 offseason the same way they began it – with a dangerously unexciting match-up with an upper-tier MAC East opponent away from home. Of course, the last time we saw UConn play meaningful football, they were thrashing the MAC East’s best in a 38-20 win over Buffalo in the International Bowl.

Like all clichés, though, this one doesn’t hold up. The UConn team that steps onto the field Sept. 5 is of course completely different from the gentlemen who pounded the Bulls in Toronto. And naturally, this team will have to work out the kinks of new personnel and a new offense on the road against an opponent desperate to make a statement against a BCS team. (One thing in UConn's favor: new OC Joe Moorhead's Akron squad put 48 and 42 on Ohio the last two years.)

For just the second time in the Rentschler Field era, UConn is playing an opener that means something against an opponent with a pulse. Or at least an opponent I’m convinced could potentially have a pulse.

Now, keep in mind the other such team was Duke in 2007. It made sense at the time. And that new-look UConn team put those fears – and the Blue Devils – away rather quickly.

Luckily, Edsall probably has a fully-stocked cabinet of go-to clichés – from your standard "on any given Saturday, anyone can win a football game" and "there’s no easy games on this schedule" to your more exotic "we need to come together as a team," or even a Jeff Adrien-approved "we’ve gotta take it to them and just play our game."

I'm sure they will be put to good use over the next eight or nine days. And really, that’s why he gets paid the big bucks.

2009 outlook in 50 words or less: After a frustrating season in which they lost four games by 8 points or less (and actually outgained opponents on average, 361-349), the Bobcats seem ready for improvement. They have as much a shot as anyone of winning the wide-open MAC East, and 6-7 wins is certainly in reach.

The Huskies win if: They take what the defense gives them, they play smart and play hard, and the team recognizes that you don't win games on paper. That'll be 1.5 million dollars, thank you.

The Boneyard melts down if: The new offense does not magically transform into USC circa Leinart/Bush by the end of the first half. Although really, after the Ambrose Era, I could see Moorhead getting a grace period from the fickle faithful.

Bottom line: Have I mentioned that I’m not a huge fan of road games against MAC teams? Not that I think that UConn is above such nonsense – they are not (witness Ohio State playing at Toledo this year, for example). It’s just that why would you put yourself in one of these tricky no-win situations? Here, a win is expected. There, all UConn represents is a major-conference scalp to be worn like so many Davy Crockett hats by the unwashed masses of the lesser conferences.

I suppose the benefit is that it gives the team a little urgency right out of the gate. In other words, you’d better not lose to Ohio or else how in the world do you expect to compete with the West Virginias and North Carolinas and Notre Dames?

As you can probably tell, this game terrifies me. Since Solich came over from (being unceremoniously fired from) Nebraska in 2005, the Bobcats have beaten just three non-MAC FBS opponents, and two of them were middling BCS conference teams (Pittsburgh in ’05, Illinois in ’06), which is just the sort of tier UConn occupies. Plus, Phil Steele has Ohio picked to finish in the top 50 (because he goes by how the season will end rather than how good the teams are, but still), and he’s really good with this stuff.

Don’t get me wrong: the Huskies should win (and they are six-point Vegas favorites as of this writing), but given how much transition this UConn team has undergone, I suspect it might be a tad more frightening than you’d like from a season-opener.