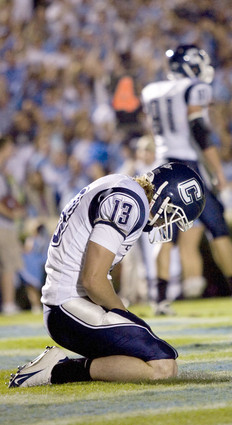 Everything was looking pretty good last year heading into the Huskies’ Oct. 4 date with the Tar Heels in Chapel Hill.

UConn was 5-0 and nationally ranked, Donald Brown was stiff-arming the crap out of people and proving himself as more than a one- or two-game fluke, Tyler Lorenzen was injured (always a positive), and the team looked as though it may be able to backslide to win at least a share of the conference title for the second straight season.

And after feasting on delicious, Randy Edsall-approved cupcakes and teams that could only be described as "meh," the then 3-1 Heels, fresh off a win at Miami, were the perfect team for the Huskies to prove their worth.

Then Bruce Carter decided that wasn't going to fly.

But while Carter’s personal destruction of the Huskies’ kicking game provided the most memorable (and painful) moments, it was just one of the many things that went wrong. Converted safety Shawn Draughn rushed for 109 yards, including a 39-yard TD scamper. And in his first career start, Zach Frazer hurled three Ints, including one returned for a TD by 300-pound DT Marvin Austin.

Although the score might not suggest it, it was a pretty embarrassing loss. Not as embarrassing as, say, losing by 45 with the conference title on the line. But the Heels were up 31-6 at one point in the third, and if not for a late score by The Donald, that West Virginia joke would have probably morphed into something like, "Bruce Carter just dropkicked Desi Cullen again."

And the odd thing was, at the time, it felt like UConn was still in the game. Despite the blocked punts and Ints, Donald Brown still compiled 161 yards and Frazer played OK, racking up 210 yards throwing. And the Huskies actually compiled 115 more yards on offense. I mean, D.J. Hernandez had 103 receiving yards. How the f*ck does that happen?

Either way, the biggest effect was that it exposed the team’s one fatal flaw: turnovers.

With almost nothing on offense aside from Brown, the Huskies only had a chance to win as long as they didn’t shoot themselves in the foot. Because instead of pulling a Plaxico Burress and ending up with just a flesh wound and some tattered sweat pants, everything fell apart.

And after losing to UNC, the season seemingly did as well.

UConn lost to a reeling Rutgers team two weeks later, Frazer was concussed, the team struggled in conference play, and so on. Most of the problems, like a non-existent passing game, would have caught up to the Huskies regardless. But after riding an emotional high for five games and coming close to giving in to optimism, the loss kind of put things back into perspective.

This year’s matchup should again serve as a measuring stick of sorts, but under much different terms.

Since very little will be "known" on Sept. 12 in all of college football, the Huskies probably won’t assert itself as a contender either way (see: post-Oct. 18 Rutgers). But after what should be a stomping of Ohio, this will be the first test for many shiny new additions, chief among them Joe Moorhead’s new offense.

So instead of figuring out where they stand in the national picture, this time the Huskies should get a nice picture of what they have in their own players for the rest of the season.

Team blogs of interest: Carolina March is the Tar Heels blog for SB Nation, so let’s go with them.

Notable losses: 41-10 to NC State; 16-13 to a Virginia team that was blown out by UConn; 31-30 to West Virginia in the "Hey, Hakeem Nicks does crazy things with his hands (get your mind out of the gutter)" bowl.

2009 outlook in 50 words or less: The defense has talent, but last season’s 92nd-ranked offense must replace its top three receivers. Although the Heels open No. 21 in the AP poll, the spot projected by the ACC media (third in the ACC’s Coastal Div.) seems about right.

The Huskies win if: If Desi Cullen makes it out alive.

The Boneyard melts down if: If anything negative is written about the team. But for this game specifically, probably a loss over 20 points.

The Heels aren’t a powerhouse. Far from it. But right now, the Associated Press and USA Today tell me this is the toughest opponent on UConn’s schedule. And while that probably isn’t true, they should at least be in the top three or four by the end of the season. Which is why I can’t see a win here.

But if the Huskies can at least keep it within a touchdown or so and display some fluidity and efficiency in their new offense, I’d say that’s a victory.