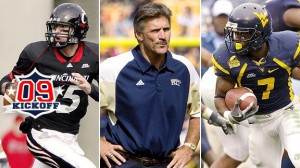 The above image is what ESPN has chosen to highlight its 2009 Big East preview. You should notice two things right of the bat. First and foremost you should must note the righteous display of Wannstache. Second, you may notice that a certain team from Storrs is missing, but do not be alarmed, even from my Husky-loving point of view, I think that was probably the right call.

Anyway, despite UConn getting stiffed on the fancy homepage picture, they did get a handful of mentions in the preview proper, and since I do nothing better than reporting on other people reporting, here are the highlights (perhaps that is not the most accurate term, but such are the meager joys):

"The last few years, Connecticut has used a buttoned-down, conservative style on offense, heavily relying on the running game and passing only as a change of pace. So it will be a pretty drastic overhaul when the Huskies come out running a no-huddle, high-paced attack under new coordinator Joe Moorhead. It may either work brilliantly, allowing UConn to take the next step in its ascension as a program or the team may prove not to have the adequate weapons at receiver to make it work. Either way, things won't be boring."

Well I do not know about you, but that got me pretty excited, until I read the "weapons at receiver" part (Dawyne Difton excepted). So it looks like based on this, UConn's offense probably will not be boring, least of all for opposing defenses.

Surprise team of the year:

"Connecticut. Simply because no one is talking about the Huskies, and Randy Edsall always fields a solid team. If UConn can generate more points with its new no-huddle offense, its defense is good enough to make sure this team is in the thick of the Big East race."

Big East blogger Brian Bennett wrote those words for ESPN, and despite the WWL's spotty hiring record, that fills me with hope. Because hey, if going 3-4 in conference is good enough to put the Huskies"in the thick of" a race for an undeserved BCS bid, then I'll take it.