Share All sharing options for: You haven't seen middle-aged men beg for cheaply made T-Shirts until you've seen 'em in high-def 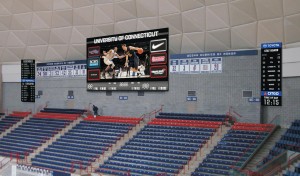 After years of forcing their crowds to watch highlights and that contest where the babies put on oversized jerseys and try to shoot a layup without faceplanting in regular olde definition, Gampel will be blasting off into the future for the 2009-10 season ... and beyond!

The university announced today plans for brand new score and video boards, which are set to be installed by October. But judging from previous on-campus construction projects, I think a 2012 unveiling is more likely.

But while you wait, the athletic department also released some mock-ups, seemingly drawn out on MS Paint by Blane Dog, of what it should look like. And to build excitement some more, they chose to use a very uplifting image to feature -- the time Joe Alexander posterized Stan and UConn lost yet another Big East Tourney first-round game.

Nevertheless, it will be a nice addition to a stadium that doesn't really have much going for it other than it looks pretty appealing in comparison to The Morgue. Plus, it appeases Cal for a few months as he continues to campaign for a (much-needed) practice facility.