Share All sharing options for: Preseason Camp update: The curse of Lorenzen claims its first victims 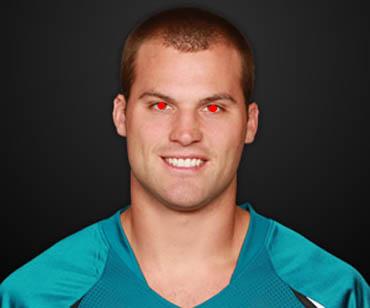 They say if you write his name in the mirror backwards and say it 3 times, you fumble what's in your hands.

Less than 24 hours after Tyler Lorenzen, he of the arm made of angle hair, caught a for-real, no-kidding NFL touchdown, the world has begun to take its vengeance. Not in the fire-and-brimstone way that was predicted in the scriptures (i.e. Lou Holtz's playbook), but still pretty bad.

At the beginning of practice, Randy Edsall rallied the media representatives and delivered the 10 plagues of Storrs (all culled from UConnReport.com ($), The Courant and Runway Ramblings):

The good news is the starting lineup was mercifully left untouched (and thank Dan O. for that).

But the team's depth continues to take hits. A few weeks ago, Edsall noted that he was concerned about the depth at linebacker, and shifted a few people around to help. But with all the injuries and suspensions, there looks to be an even greater concern at safety, where the team has struggled to find a competent running mate with Robert Vaughn for two straight summers.

But the biggest development was the loss of Bennett, who was just edged out by Dan Ryan for the starting left tackle job. Bennett, who was rated the No. 46 tackle coming out of West Potomac (Va.) in 2008, has immense talent, as evidenced by his quick ascent up the depth chart in just his second season after redshirting last year. And to lose a quality player like that is going to hurt. Maybe not right now, but eventually. Ryan hasn't made much noise in his first four seasons, and that he just won the job over a second-year player seems to signal that he's more of the "Well, he paid his dues" type.

Again, nothing earth-shaking. But I'd watch my livestock if I were you.