Cody Brown out for the season

Share All sharing options for: Cody Brown out for the season 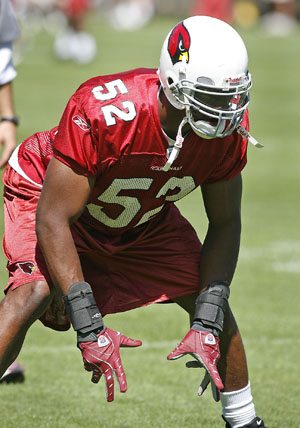 Although quite fashionable, those wrist guards didn't help Cody Brown much.

(Apologies for the lack of blog action the past few days. Took an impromptu break, let's say to gear up for f-ball season.)

Cody Brown's first pro season is over before it began.

The former UConn defensive end and current Arizona Cardinal dislocated his left wrist in a preseason game against the Chargers Saturday and will need season-ending surgery to repair it.

From the Arizona Republic:

"Nate Haber, one of Brown's representatives, said the bones were put back into place on Saturday but that his client will need surgery once the swelling decreases. Haber said Brown has been told that recovery time is four to six months."

Brown, the Cardinals' second-round pick and one of four Huskies chosen on Day 1 of the NFL draft, was expected to make the transition to rush-OLB as the Cards transition to a base 3-4 defense for good after toying with it for the past few seasons under Ken Whisenhunt.

Brown wasn't supposed to start or anything, but the injury will certainly delay his development at his new position. But as a second-rounder, he's at least safe from being thrown on the scrap heap.

Oddly enough, former UConn OG Donald Thomas was forced to miss almost all of his rookie season in 2008 because of injury after being projected as the Dolphins' starting right guard.

Do I smell an unsubstatiated curse? I think so.