Big East basketball preview in August? Sure, why not?

Share All sharing options for: Big East basketball preview in August? Sure, why not? 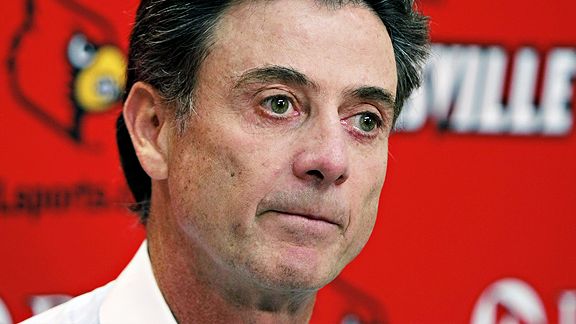 Rick Pitino just wants to get back to basketball. And brains. Sweet, sweet brains.

It may be August, but ESPN is already churning out the college basketball preview content and capitalizing haphazardly in the middle of words like they were a No Limit recording artist.

In its latest edition of their conference ShootAround, Dana O'Neil -- who, unlike her more successful sister refuses to wear a one-piece yellow jump suit (my lord, there are a lot of pornographic Teenage Mutant Ninja Turtles pictures online) -- has a pretty lengthy break down of the Big East. An even more impressive feat given that she wrote it without having her brain eaten by Rick Pitino, or having him ... uh ... too soon.

All of the UConn material seems to pretty much be in order.

O'Neil ranks the Huskies No. 3 in the conference, about where most incredibly early projections have put them (although I'm not sold on West Virginia yet). She also hits all the big points for next season: Kemba making a smooth transition to the 1, Dyson's important, as evidenced by last season, Stan may be a star-in-the-making.

However, I was a bit miffed that Nochimsongate was ranked as the No. 1 offseason storyline in the conference. Now, the way she writes it makes it seem like its the story lines that will carry into the season (you know, because we're still about two months away from even an exhibition). But the subhead clearly states "offseason."

Regardless, are you telling me that this Nochimson thing is bigger (or funnier) than Rick Pitino paying for an abortion (allegedly) and then (in some way) telling an assistant to marry her?

While I'm not turning a blind eye to what could be a Memphis-esque hammer (although in Calipari's case, one of those rubber hammers you mash Play-Doh with) dropped on the program. But this is going to haunt Pitino for the rest of his career. And even when the media gets sick of rehashing it, I can assure you, student sections will not. Just ask Jason Kidd and his mustachioed son.